Technology and Methods: Four experienced surgeons in laparoscopic surgery (>100 laparoscopic procedures) and with different experience levels in LESS took part in this study. They were asked to carry out two surgical tasks: (1) to pass the suture needle through a set of four pair of entry and exit dots in both vertical and horizontal plane marked on a training plate; and (2) to perform an ureterovesical anastomosis. For each task surgeons were randomly assigned to two groups, starting with a traditional laparoscopic needle holder (Group L) and the robotic laparoscopic instrument in its needle holder set up (Group R). This device uses a motor-driven technology, provides a handle interface with haptic feddback and an articulated intrument tip.

In order to assess their training learning curve participants repeated the exercise nine times in a period of two months. During the first (T1) and the last (T9) test completion times and the accuracy value of the correct pass of the needle through the marked dots on the training plate was measured. In addition, for ergonomic assessment, muscular activity of biceps brachii, triceps brachii, forearm flexors and extensors, and trapezius muscles was registered through surface electromyography (sEMG) and angles of the wrist, elbow (flexion-extension) and shoulder joints (flexion-extension and adduction-abduction) were recorded during the ureterovesical anastomosis. For analysis of the position of the surgeon's upper limbs a data glove and a motion capture system based on eight cameras with infrared vision and retroreflective markers placed on the surgeon's body was used (Figure 1). 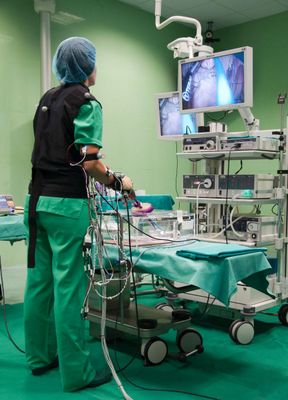 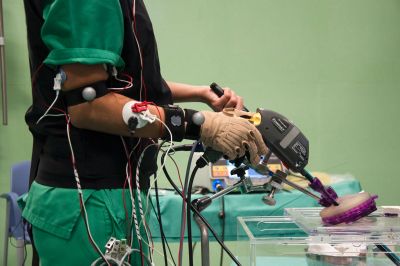 Conclusions: Results showed a positive learning curve using the novel robotic laparoscopic instrument concerning ergonomics and performance. Besides, this study shows that the use of the novel robotic instrument leads to more appropriate positions regarding the elbow and shoulder joints while performing the ureterovesical anastomosis through single site surgery.