The minimally invasive revolution in general surgery began with laparoscopic cholecystectomy. The gall bladder was the perfect organ for this emerging technology. Its need for removal was common, virtually all general surgeons were comfortable with the open procedure, and it is on a stalk, relatively easy to remove, and requiring no reconstruction. While advanced at the time, laparoscopic cholecystectomy and appendectomy are now considered basic laparoscopic skills, and surgical residents are expected to have mastered these procedures by the completion of their training. As laparoscopic technology and the dexterity of surgeons using it has progressed, previously unimagined laparoscopic operations have become common place. In particular, the ability to create an intracorporeal anastomosis has precipitated the expansion of what is now referred to as advanced laparoscopy, and that talent, perhaps, is the sine qua non of the minimally invasive surgeon.

The fundamental principles of a laparoscopic anastomosis are no different than an open anastomosis. Surgeons typically use various modifications of three techniques: hand sewn, linear stapled, or circular stapled anastomosis (EEA). As a modern laparoscopic surgeon, knowledge of and the ability to perform each are essential. The technical challenge is to re-create the angles of instrument to organ that are accomplished in open surgery. An open abdomen, for instance, allows a surgeon to approach an organ for anastomosis from multiple angles, but laparoscopy limits that to the angle formed by the trocar entry site and the position of the organ. Organs that have a great deal of mobility such as the small bowel are therefore easier to join, because it can be manipulated into a more favorable position than the duodenum or cardia of the stomach, which are largely fixed. Efficient trocar placement may not make a difficult anastomosis easy, but poor trocar placement can make it nearly impossible.

Often used for a side to side anastomosis of the small bowel such as the jejunojejunostomy in a gastric bypass, the technique also works well for end to side (e.g., gastrojejunostomy), or functional end to end configurations (e.g. small bowel resection with primary anastomosis). The two bowel segments are brought into juxtaposition, and a single stitch placed between them. The assistant lifts this stitch up with the right hand, suspending the bowel segments. 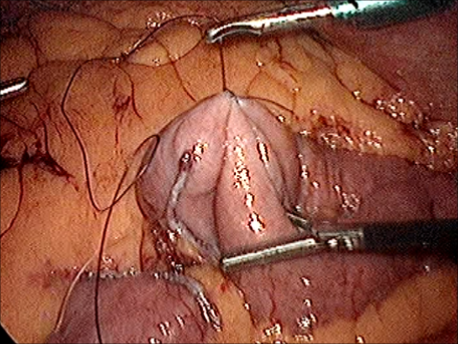 Enterotomies are created on the antimesenteric side of the two segments in the center of equilateral triangles formed by the suspensory stitch (A) and the left hands of the assistant (B) and the surgeon (C) retracting the intestine. 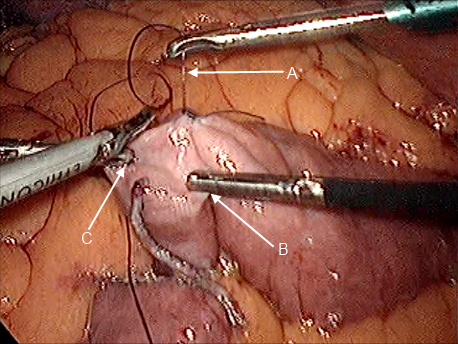 The surgeon slips the cartridge and anvil aspects of the linear stapler / cutter into the corresponding enterotomies, and the two limbs of intestine are advanced over the device similar to pulling up a pair of pants. 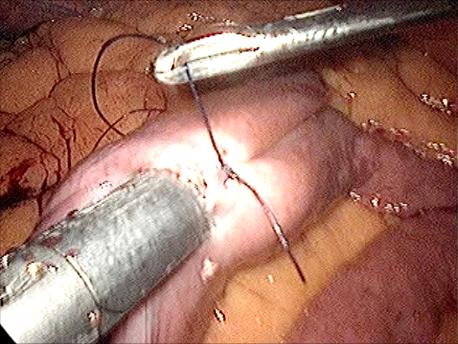 The anastomosis is created by firing the device leaving a single common enterotomy. This can be closed with a hand sewn suture, or with another application of the linear cutter. Hand sewing is generally required for smaller anastomoses or less mobile tissues such as the gastrojejunostomy in a gastric bypass. Regardless of technique used to close the enterotomy, care must be taken to avoid narrowing the lumen of the anastomosis. To staple close the defect, the original traction stitch is at the apex of the common enterotomy (A), a second traction stitch is placed at the opposite end of the enterotomy (B), and the assistant holds both stitches. 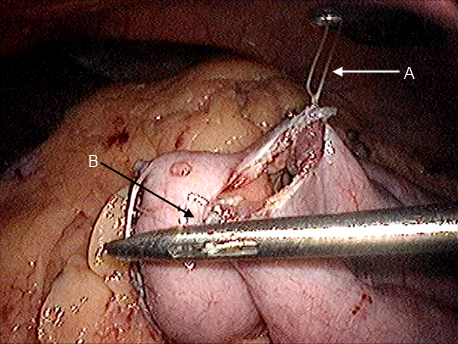 The surgeon brings the linear cutter / stapler underneath the stitches and across the enterotomy. The two intestinal segments must be parallel to each other and to the axis of the stapling instrument to prevent obstruction. As the stapler is closed across the enterotomy, it is useful to conceptualize the process in two steps. First, attention is directed to the tissue within the crotch of the stapler. Once this is properly oriented, frequently too much intestine has crept into the stapler near the apex threatening the patency of the bowel (arrow). 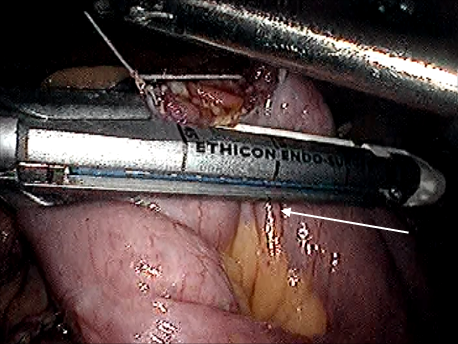 To decrease the amount of intestinal tissue in the stapler, it is partially closed to hold the tissues, and the surgeon takes the suspensory stitch nearer the apex (arrow) from the assistant. He or she will then pull the intestine posteriorly through the stapler, and push it further in towards the hinge such that only a small strip of intestine is actually excised, but the enterostomy is fully closed. 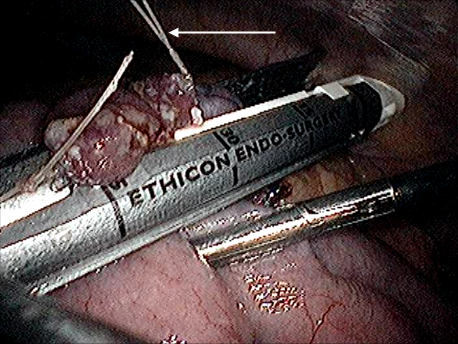 After firing the stapler, the excised strip of intestine is removed, and the staple line inspected. Any points of concern are over sewn, but this is infrequent. 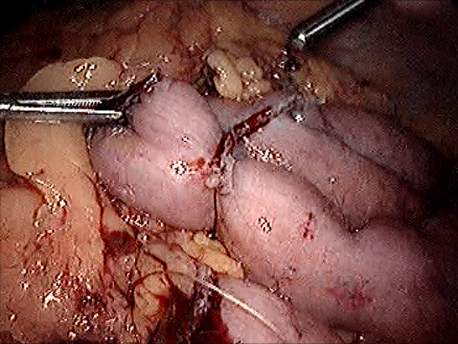 Mesenteric defects should be closed with a permanent suture and can be done as a running, interrupted, or purse string closure. Permanent suture is preferred for this step since fewer adhesions are formed during laparoscopic surgery.

The hand sewn technique is appropriate for virtually any type of gastrointestinal anastomosis whether end-to-end, end-to-side, or side-to-side. It generally takes longer and requires more dexterity than either of the mechanically assisted techniques. The axis of the suture line in relation to the needle driver is paramount. That angle should be between 0o (i.e., parallel) and ± 45o. Beyond that it is very difficult to place a stitch across both sides of the tissues being joined. This limitation is somewhat mitigated with articulating instruments which place an additional joint inside the abdominal cavity that is not present with traditional laparoscopic instruments. This has been one of the key advantages of robotically operated instruments such as the DaVinci® system. It allows a greater range of motion. With those caveats, however, the fully hand sewn technique affords some flexibility not available to the stapled anastomoses. Because each stitch is placed next to the one preceding it, an anastomosis is constructed gradually allowing somewhat incongruent tissues to be joined. By contrast, stapling devices create the entire anastomosis simultaneously, and therefore require the tissues be perfectly juxtaposed before the anastomosis is begun. Hand sewn anastomoses can be completed in one layer or two, with interrupted or continuous suture. It is generally advantageous to place traction sutures at the leading and trailing corners of a hand sewn anastomosis, which the assistant can use to orient the suture line in the most advantageous angle.

The EEA stapler has been a wonderful tool for creating anastomoses at the anatomic ends of the GI tract in the abdomen. It is most useful when one of the ends being joined has limited or no mobility, e.g., the rectum, esophagus, and upper stomach. It is quick, completing the entire anastomosis with one squeeze of the handle, and produces a uniform size lumen. Rectal anastomoses are relatively straight forward, because the anvil is inserted into the cut end of the proximal bowel which is sufficiently long and mobile. Contrast this to a standard 15-30 cc stomach pouch in a gastric bypass patient, and the challenge of anvil placement is evident. The standard method of placement in an open gastric bypass patient was to create a gastrotomy, insert the anvil, and purse string around it, much the same as a rectal anastomosis. However, in an effort to minimize intracorporeal suturing, several methods were developed to introduce the anvil into the stomach. Dr. Wittgrove describes using an endoscopic snare to pull a percutaneous placed transgastric wire or suture out of the mouth, attaching it to the anvil, and pulling it back into the stomach similar to a pull technique for a PEG. (1) Another method attaches the anvil to the end of an NG tube which is inserted transorally, advanced into and through the wall of the gastric pouch, and withdrawn thereby drawing the anvil spike through the same gastrotomy as the NG tube. (2) In addition to transoral insertion of the anvil, several techniques have been described utilizing a gastrotomy on the future bypassed portion of the stomach to introduce the anvil intra-abdominally thereby avoiding any potential esophageal injury. The anvil is directed to the upper portion of the stomach before it is divided where it is made to penetrate the anterior wall with the spike.(3) (4) (5) With the anvil in place, the EEA stapler is then inserted usually via one of the trocar sites which must be dilated to accommodate it, and inserted into the opened end of the divided jejunum. The female end of the EEA penetrates the antimesenteric border of the jejunum, joins to the male end of the anvil, and the device is fired creating the anastomosis.

Several papers have compared the techniques of gastrojejunal anastomosis in gastric bypass patients. While some have shown increased stricture rates with the EEA this has not been consistent, and may be due to the diameter of the stapler chosen (21 vs. 25mm) rather than the technique in and of itself. (6) (7) (8) A larger and more recent study by Bendewald, et.al., showed no difference in the rates of stricture, leak, or marginal ulcer between the three techniques. (9) Most studies, however, do report increased wound infection rates with the EEA technique likely due to the device contaminating the subcutaneous tissue after it has been in the bowel.

Each of the laparoscopic anastomotic techniques discussed has merits. Most advanced laparoscopic surgeons will adopt one of the methods, become adept with it, and use it primarily. But like a craftsman, a surgeon can never have too many tools at his or her disposal, and familiarity with each is essential.