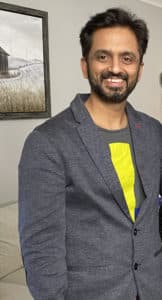 How do you entice a new surgeon to join SAGES? For Dr. Yagnik Pandya, it was SAGES member Dr. Todd Ponsky’s combination of descriptive adjectives during his residency at Case Western: “Collegiality, camaraderie, relaxing and informative.”

Dr. Todd Ponsky and his father Dr. Jeff Ponsky, along with  Dr.Leena Khaitan, his advisor at Case Western, have all been mentors to Dr. Pandya, who completed his medical schooling in his native Mumbai.  He says, “l always knew I wanted to be a surgeon, and came to the United States where I could further my training and learn about the most state of the art medicine.”

Dr. Todd Ponsky also advised that the best way to get involved is to work on a SAGES committee, adding that Dr. Pandya’s combined Indian and U.S. clinical backgrounds would provide a unique perspective. Since joining SAGES, he’s taken that advice and has worked on three committees: Foregut; Metabolic and Bariatric and Foregut; and, Diversity, Leadership & Professional Development. He says he’ll continue to be actively involved, hoping to chair or co-chair a committee in the future.

Like many other SAGES members, Dr. Pandya notes that what sets SAGES apart is what brought him on in the first place. “Other surgical associations are more focused on the formal educational aspects. SAGES is more casual, laid back and friendlier. You learn but you’re also having fun. It’s a happy, cheerful and good environment.”

And like most other SAGES members, at least one meeting Sing-Off sticks in his mind as a memorable moment. For Dr. Pandya, it was at the Baltimore meeting where he was invited to join a group, headed by Dr. Jeff Ponsky, on stage. He recalls the emotional moment Dr. Ponsky told him, “You’re part of our team and I’m really proud of you.”

Paying it forward, Dr. Pandya says he is always recruiting new SAGES members at Boston University Medical School where he serves as site director for the school’s surgery clerkship. And when he’s not plugging SAGES or spending time with his family, Dr. Pandya also pursues his passion of making short films related to human relations and interactions. https://www.youtube.com/c/StorySunaoProductions/videos