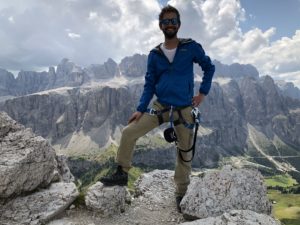 As a research fellow at the Steinberg-Bernstein Centre for Minimally Invasive Surgery in Montreal in 2015, Dr. Nicolò Pecorelli remembers that the SAGES annual meeting was THE surgical event. And when he attended his first meeting in Nashville that year, he says, “I was surprised how different it was from any other scientific meetings I’d been to. Students, residents, fellows were all very much involved and included. SAGES has always been about inclusion, diversity, supporting innovation and the younger generations of surgeons and trainees.”

Dr. Pecorelli is back in Milan after completing his fellowship training at McGill in 2018 under former SAGES president Dr. Gerald Fried and current president Dr. Liane Feldman. He’s become a very involved international member, active on both the HPB task force and SAGES HPB Masters Program Facebook page, and the Surgical Oncology committee – all of which he finds exciting even if the time difference means attending late night calls in the kitchen to avoid waking his family!

Praising Dr. Fried’s “positive vibe in the OR” and Dr. Feldman as a “brilliant surgeon and force of nature,” Dr. Pecorelli also counts a number of other SAGES members as mentors: Drs. Adnan Alseidi, Kevin El-Hayek and Melissa Hogg and Dr. Melina Vassiliou as a “fun and patient educator” who pushed him to learn upper GI endoscopy.

In addition to his committee work, Dr. Pecorelli was a co-principal investigator in a research project focusing on the development of a mobile device app for patients recovering from bowel surgery that got funded by the SAGES SMART grant in 2015-2016. He also received the Best International Abstract award at the 2016 Annual Meeting in Boston.

Dr. Pecorelli, who is working to recruit more Italian and European surgeons into SAGES, has also gotten students and residents in his institution involved. Last year, one of his students won the SAGES Medical Student Summer award and spent the summer working on her project in his clinical research lab. As he points out, “Few societies offer such a variety of opportunities.”

Having missed last year’s meeting because of COVID restrictions, Dr. Pecorelli is looking forward to joining colleagues in Denver, where he likely won’t have time for his favorite hobby: skiing!