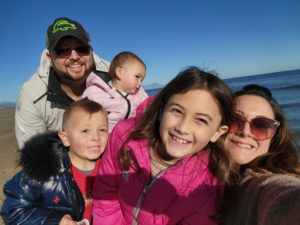 “Work hard, play hard—SAGES definitely gets that right!,” says Dr. Tiffany Cox, the latter referring to the annual meeting and sing-off, of course. But she adds, “the availability of experts who speak at SAGES and then make themselves easily accessible and available for one-on-one mentorship is the heartbeat of the society. There is also ample opportunity for leadership and advocating to mold young, eager surgeons into the surgical leaders of tomorrow.”

Dr. Cox is currently deployed in Italy with the U.S. Navy at the U.S. Naval Hospital in Naples with her husband and three young children.  She is loving the experience and opportunity to embrace a new culture as she serves her country and travels with her family while honing her yoga skills.

Even with her deployments, Dr. Cox has managed to stay extremely active on several SAGES committees. This includes teaching many of the fellow robotics courses as a member of the Robotics Committee, previously served on the Teleproctoring/Telementoring Task Force, and continued engagement as a member of the Military Committee advocating for active duty military members in SAGES and collaborating on practice patterns to streamline MIS approaches and care throughout the DOD.

Dr. Cox first joined SAGES as a resident and Candidate member in 2009, encouraged by one of her early SAGES mentors, Dr. E. Matt Ritter. At the time, she was working on patient-centered clinical outcomes research with MIS mentors and was accepted for a podium presentation at the SAGES meeting in Phoenix that year. Her later work in the simulation lab under his guidance resulted in creation of a physical platform endoscopy trainer-now called ETS-now used by many GME programs to proficiency train their residents to pass certification for FES.

It was also during these cultivating years that she heard Dr. B.Todd Heniford as a guest speaker at a SAGES conference. It was clear she knew she wanted to train under his operative mentorship to bring back to the military a skillset that would be cutting edge in abdominal wall reconstruction and revisional foregut surgery.

Of SAGES overall, she adds, “I have admired and worked to emulate the networking opportunities that the more experienced and true leaders of SAGES fully embrace.  As a resident, many societies can easily dismiss or underappreciate the resident/candidate members of the society.  SAGES has never been that way.  They engage you at all levels and introduce you to mentors early on in your career.”

Dr. Cox plans to be a lifelong SAGES member, furthering her skills training and collaboration to not just  further SAGES interests, but to bring about a unified mindset of best practices and standardized training across societies.

“Once out of the Navy, I plan to continue my surgical teaching career into developing countries to train their future surgeons skills that can meet their needs for advancement of surgical medicine globally.”