Cook Medical received FDA approval for Hemospray on May 7, 2018.

HemosprayTM is a proprietary mineral powder that can be administered endoscopically and promotes hemostasis. The powder, inorganic and inert, forms an adhesive layer when it comes into contact with fluid. The adhesive layer provides mechanical compression and promotes hemostasis. In addition, the powder absorbs water, increasing the concentration of platelets and clotting factors at the site of bleeding, which promotes the formation of an adherent coagulum.

HemosprayTM is easy to administer and may be used by endoscopists with minimal experience. The device consists of a pressurized CO2 canister, a delivery catheter, and a powder reservoir. The powder is delivered in 1-2 second bursts until hemostasis is achieved. The powder and coagulated blood mixture remains in place for approximately 3 days, at which time it sloughs from the mucosa and is eliminated from the GI tract naturally.

HemosprayTM was initially used for treating large area bleeding, such as a ruptured tumor or for rescue therapy after initial endoscopic therapy. Subsequent studies have displayed that HemosprayTM is safe and effective in treating primary upper and lower gastrointestinal bleeding. A randomized controlled trial found that HemosprayTM was as effective as epinephrine injection and clipping as the primary endoscopic treatment for patients with non-variceal acute upper gastrointestinal bleeding1.

HemosprayTM is indicated for use in cases of upper or lower gastrointestinal bleeding, especially when advanced endoscopic equipment or expertise is not available.

Due to concerns for gas embolism, the manufacturer listed the presence of varices as a contraindication to the use of HemosprayTM. Several studies, however, have shown that Hemospray is effective and safe in the treatment of acute gastrointestinal variceal bleeding2,3. 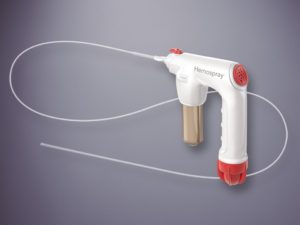