23rd International Congress of the EAES 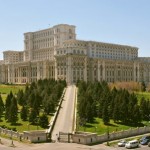 It gives me a great honor to be able to welcome you in Bucharest on June 3-6th, 2015, for the 23rd Congress of the European Association of Endoscopic Surgery (EAES).

The Romanian Association for Endoscopic Surgery (RAES) has understood the national significance of the Event and decided to organize the 8th RAES Congress, in the same time and place, in conjuction with the EAES Congress.

The Congress Venue is the Palace of Romanian Parliament, an impressive building that stands right in the historical and geographical center of Bucharest, as a giant construction marking the “golden age” of the dictatorial regime.

Bucharest, the capital of Romania, welcomes you with its warm perfume and architecture of the last Century that have given the nickname of “Little Paris of East Europe”! The period of communism has left big footprints in the aspect of the city too, but the modern facilities, the historical monuments, the museums, parks, restaurants, night life and city’s atmosphere will leave you great tourist memories!