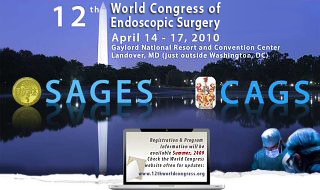 View all SAGES 2010 Abstracts and Posters

Introduction: Traumatic flank hernias are caused by a blunt abdominal trauma with resultant detachment of the oblique musculofascial complex at the iliac crest and/or costal margin. Given such proximity to the bony structures and essential absence of the healthy fascia to anchor the mesh, traumatic flank hernias represent a challenging surgical problem. Although laparoscopic repair… Continue Reading

Chronic venous insufficiency (CVI) is a tremendous health care problem. Patients with advanced clinical sequelae such as lipodermatosclerosis or ulceration of CVI should be considered the presence of incompetent perforating veins. Venous disease affects a correlation between the superficial, deep, and perforator veins of the lower extremities. In general, the superficial venous deficits are addressed… Continue Reading

View all SAGES 2010 Abstracts and Posters