Objective of the Technology: Gaze pattern is demonstrated to be an indicator for a surgeon's competency in laparoscopic surgery. Eye-tracking studies have showed that experienced surgeons concentrate their eye gaze on the surgical target, while novices have a more dispersed gaze behavior. However, guiding the gaze of trainees is challenging as it requires the experienced surgeon to provide a series of verbal explanations and references of the laparoscopic video to identify anatomical structures and demonstrate how to perform surgical tasks. To facilitate intraoperative gaze guidance, we designed the Virtual Pointer to enable trainers to point to or draw on laparoscopic video for a trainee to see. We aimed to study the efficacy of this technology in improving trainees’ gaze patterns.

Description of the Technology and Method of Its Use: The Virtual Pointer is a video referencing system that uses a touchless natural user interface based on the Microsoft Kinect sensor. Real-time image telestration, such as pointing and drawing, can be performed by a surgeon using a combination of key words and hand movements. The system, running on a separate laptop computer, takes in the real-time laparoscopic video, overlays the telestrations, and displays the resulting view on the laparoscopic video monitor. The overlay can be on continuously or can be displayed only when needed.

Preliminary Results: The study design was a counterbalanced, within subjects controlled experiment, comparing standard guidance (i.e. verbal instructions and any naturally occurring pointing/gestures at the monitor) with Virtual Pointer guidance. Subjects were seven surgical trainees (1 surgical fellow, 1 research fellow, 2 PYG-2 and 3 PYG-1). Each trainee performed four laparoscopic cholecystectomy tasks on a physical laparoscopic model under the guidance of one of two experienced surgeons (Figure 1). A Tobii Pro X3-120 eye-tracker was used to capture the trainees’ eye movements. Gaze concentration (i.e. areas of gaze focus) was visualized by the gaze heat maps, and measured by the standard deviation of the Euclidean distance between each fixation position and the origin O(0, 0). A linear mixed model was used for the comparison of gaze concentration between Virtual Pointer and standard guidance. 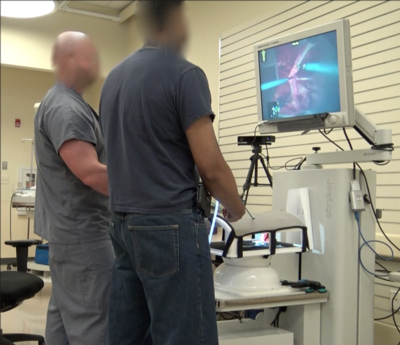 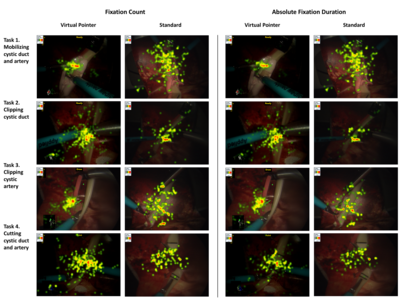 Conclusions and Future Directions: This study demonstrates that the Virtual Pointer reduces novices’ gaze dispersion and concentrates their attention on the target. This shows that an easily deployed virtual pointer could substantially improve surgical trainees’ in-the-moment gaze focus. Future studies are needed to assess the trainees’ performance with this gaze focus as well as the longer-term gaze focus effects after using this technology.