Methods:
Using the ACS-NSQIP Participant Use File database, all patients undergoing both open and laparoscopic colectomy between 2005-2009 were identified based on CPT code. AHA Cardiac risk factors were mapped to existing NSQIP comorbidities such as history of ischemic heart disease, compensated or prior heart failure, cerebrovascular disease, diabetes mellitus and renal insufficiency were studied in both the laparoscopic and open group. Cardiac specific outcomes that were studied included myocardial infarction (postoperative and intraoperative), cardiac arrest (Intra-op and post op), congestive heart failure as well as death. Statistical analysis was done using SPSS 19 ( IBM, NY). Chi square tests, univariate and multivariate logistic regression models were used to study the impact of variables on outcome.

Increasing number of cardiac specific risk factors was significantly associated with worse outcomes from a cardiac standpoint (p<0.001) in both open and laparoscopic groups. Using regression models, the factors that were significantly associated with any cardiac complications were AHA risk factors, advanced age, male sex, emergency surgery, ASA class 4 or more, wound classification. In the laparoscopic colectomy group, emergency surgery and ASA class did not affect outcome whereas in the open group, only wound class was not significant. 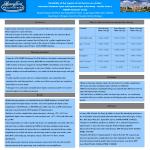