Introduction:
Low ligation of the IMA in colorectal cancer surgery were reported to be beneficial for some patient. But there is no report so far about how and where the IMA should be tied. This study analyzes long-term outcomes of the low tie by using a surgical stapler with implantable staples (Covidien Endo GIATM) vs. standard low tie ligation in laparoscopic high/low anterior resection of the rectum.

Methods:
All laparoscopic high/low anterior resections performed from August 2005 to February 2009 were reviewed from a hospital database retrospectively. Patients without lymph node metastasis evident on their preoperative CT scans were selected. In all patients, low/high anterior resection with standard low tie ligation or with cutting and ligation by using surgical stapler with implantable staples was performed. The Kaplan-Meier survival curve was created, and the Logrank test was used to compare the overall survival and recurrence free survival between two groups. P<0.05 was considered a significant value.

Results:
Fifty-one patients were diagnosed as rectal cancer with no lymph node metastasis by colonoscopy and CT scan preoperatively. Thirty-four patients underwent low or high anterior resection by using a surgical stapler with implantable staples (group A). In these cases, the inferior mesenteric artery (IMA) was dissected after the left colic artery (LCA) branched. Seventeen patients underwent low/high anterior resection with standard low tie ligation; the IMA and the LCA was detected and the IMA was clipped and dissected after the LCA branched (group B).

Conclusion:
Low tie ligation by using a surgical stapler with implantable staples is an easier way to dissect the IMA after the LCA branching and, not significantly different in OS and RFS, compared with standard low tie ligation.
This study was retrospective and a small group study, so further studies are required. 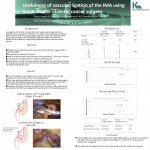