Introduction: Airway stents have gained increasing popularity in the management of challenging tracheobronchial obstruction based on the simplicity of their placement and the lack of good alternative approaches. Careful and judicious stent placement has provided significant and life-saving airway improvement in many patients. We present our experience with the use of the ultraflex stents in the management of airway complications in esophageal carcinoma and analyzed the relationships between survival after tracheobronchial stenting and clinical features. Patients and Methods:Twelve patients with esophageal carcinoma underwent placement of ultraflex stents for respiratory distress caused by tracheobronchial invasion. Mean age of the patients was 62.3+9.4 years (range 51-79 years), and there were 10 men and 2 women. All patients had histologically confirmed squamous cell carcinoma of the esophagus. Tumor resection had been performed in 7 patients, curative surgical intervention in 4 and a palliative operation in 3. Tumor resection had not beenperformed in 5 patients, bypass surgery in 4 and chemo-radiation therapy in the remaining 1 patient. The sites of stenoses included the trachea in 7 patients, and left main bronchus in 5. The causes of the tracheobroncial stenoses involved primary tumor invasion in 4 patients, mediastinal lymph node invasion in 5, and mediastinal recurrence in 3. The ultraflex stent (Boston Scientific, Tokyo, Japan) was placed using flexible bronchoscopy under local anaesthesia and sedation. Results:Since careful and judicious stent placement has provided significant, complications of stent placement was nothing and all patients received chemotherapy after stents insertion. In 2 patients of tracheal stenoses, tracheal intubations carried out by the intensive care unit for complaints of severe respiratory stridor. Another 10 patients had respiratory distress and were admitted to the hospital. After stents insertion, immediate relief of respiratory symptoms was obtained in all patients. The mean survival after stent insertion was 105 + 71 days. Causes of death were re-obstruction in 2, airway bleeding in 2, and cancer progression in 8. Multivariate analysis in age, gender, treatment degree, tumor resection, the site of stenting and the cause of stenosis revealed that tumor resection and the site of the stenting were the significant and independent risk factor for the survival (P 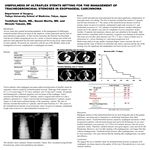