Use of Laparoscopic approach for removal of large Gastric Trichobezoar in children.

Purpose: To report our technique of laparoscopic removal of large Trichobezoar in children.

Material methods: 9 year old child presented with vomiting and intolerance to oral diet. Upper GI contrast revealed the presence of a large Trichobezoar in the stomach. The Gastroenterologist took the child to the procedure room for gastroscopic removal of the trichobezoar. After several attempts they were only able to remove a bit of it and unfortunately their grasper got stuck into the bezoar. The surgeons were consulted and the patient was then moved in to the OR with the gastroscope and the grasper insitu.

Results: The child did well after surgery and was discharged. There were no intraoperative or post- operative complications. At 1 year follow up the child was doing well and the scars were well healed.

Conclusion: Laparoscopic removal of large gastric trichobezoar is safe and effective in children. It should be tried in all children before subjecting them to large laparotomy incisions. 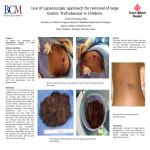