Introduction: Minimally invasive liver surgery is a complex procedure potentially aided by image guidance. The technique requires fusing a preoperative imaging set with live intraoperative laparoscopic images, rendering the target organ to appear transparent. This construct works well until the actual resection begins and deformation of the liver degrades the accuracy of the image fusion. Traditionally, accuracy is restored by rescanning the patient – a difficult task in the middle of complex surgery. Our group theorized that combining tracking of an internal fiducial marker placed within the biliary tree with computer modeling to predict organ deformation would improve the accuracy of image-guided liver surgery and reduce the frequency of intraoperative re-scanning.

Method: A simulated tumor was implanted into the liver of a porcine explant model or human cadaver. A guidewire and or biliary stent was then placed into an adjacent bile duct as an internal fiducial marker using a transpapillary approach. The liver was deformed by retracting it in a caudal direction (Figure A and B). Rotational imaging was acquired in the neutral and retracted positions. Computer modeling using novel software was used to predict the position of the tumor and internal fiducial marker, guide a planned resection line and compute resected liver volume. Accuracy was calculated by comparing the results of the computer model with the real-time fluoroscopic imaging. Conclusion: Use of internal fiducial markers and novel computer modeling resulted in successfully tracking the position of a liver tumor with millimeter accuracy during organ deformation. It also maintained an accurate prediction of the plane of surgical resection and correctly calculated the mass of residual liver following resection. Use of this model during minimally invasive liver surgery has the potential to maintain the accuracy of the fused images far longer than current conventional methods making the procedure safer and reducing the need for repeat intra-operative scanning. 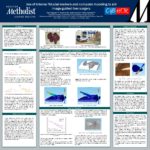