OBJECTIVE: Minimally-invasive laparoscopic procedures have proven efficacy for a wide range of surgical procedures as well as benefits such as reducing scarring, infection, recovery time, and post-operative pain. While the procedures have many advantages, there are significant shortcomings such as limited instrument motion and reduced dexterity. Robotic surgical technology has overcome some of these limitations and has become an effective tool for many types of surgeries. Robotic platforms typically have an increased workspace, greater dexterity, improved ergonomics, and finer control than traditional laparoscopic methods. An in vivo surgical robot prototype with two independent four degree-of-freedom (DOF) arms has been developed to take advantage of the benefits of robotic surgery.

DESCRIPTION: Our surgical platform consists of a two-armed robotic prototype, vision system, distributed motor control modules, custom robot control software, and remote surgeon console. Each arm of the device consists of a two-DOF shoulder joint, upper arm link with a one-DOF elbow, and forearm link with a one-DOF wrist twist and end-effector. Various surgical tools such as a bulk tissue grasper, surgical shears, needle driver, and bi-polar/mono-polar electrocautery tools can be used as end-effectors for the robotic arms.

The robot is inserted arms-first through a gel diaphragm into the insufflated abdominal cavity and only requires a single 4.3-cm incision. A 5-mm port is located behind the arms to allow for the insertion of a flexible endoscope after the device is deployed. Once deployed, the device can be grossly positioned through rotations in the incision to access all quadrants of the abdominal cavity.

PRELIMINARY RESULTS: Our robotic device has a reachable workspace of 3926 cm3 for each arm and a shared workspace of 2216 cm3 between the two arms. The device has average end-effector velocity of 552 mm/sec and average force of 15 Newtons throughout its workspace. The platform has been extensively tested through benchtop studies and in vivo animal studies in a porcine model. The device demonstrated the ability to successfully manipulate and cauterize tissue, automatically track tool motion with the vision system, and reach all quadrants of the insufflated abdominal cavity. The surgeon felt that the robot responded accurately to the given commands and provided smooth and intuitive control of the end-effectors.

DISCUSSION: This proposed surgical platform has demonstrated its ability to enhance the dexterity and workspace of a surgeon through a single-incision device. While the device has sufficient strength and speed to manipulate tissues and organs in the abdominal cavity, further control of end-effector orientation is desired.

Further work is being done to increase the workspace and dexterity of the device while further reducing the required incision size. This will be accomplished by further compacting the drivetrain of the device, adding additional DOF’s to the robotic arms, and through the development of a custom vision system that is integrated into the body of the device. 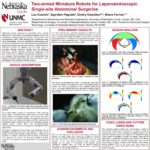