Background: Laparoscopic ablation and resection of liver tumors is rapidly gaining momentum. Well over a decade ago, monopolar RFA devices were introduced and replaced cryoablation as the preferred modality for ablating liver tumors. Bipolar RFA technology which requires placement of two probes works fast and can be used for two distinct purposes. We describe our early experience using laparoscopic bipolar RFA technology for (1) tumor ablation, (2) parenchymal precoagulation prior to transection, and in selected cases both applications were used.
Methods: We reviewed our prospectively maintained database of patients with liver tumors treated by laparoscopic approach utilizing the bipolar RFA device. We identified 14 patients that underwent laparoscopic RFA of liver tumors, resection or both procedures. RFA alone was used in patients with contraindications to resection or as bridge therapy toward transplantation. We analyzed the indications and operative approach for these operations. Some procedures were done with the patient in the left lateral decubitus and others in the supine position. The liver is fully mobilized off of the retroperitoneum and diaphragm to fully access the tumor baring segments. RFA was done using the InCircle (RFA-medical) bipolar probes in all cases. During laparoscopic resections, the parenchyma was precoagulated using the Monarch probes (RFA-medical) which have linearly oriented deployable tines. In most cases parenchymal division was done using the Gyrus cutting bipolar forceps (Olympus) depending on nature of the liver parenchyma.
Results: Of the 14 study patients, 8 underwent totally laparoscopic liver resections and 6 underwent laparoscopic RFA alone. The median age was 64.4 (range 44-82). The indications for surgery included primary liver tumors in 12 cases (hepatocellular carcinoma = 10; cholangiocarcinoma = 1 ; hepatic adenoma = 1) and metastatic tumors in 2 cases (breast and colorectal). All hepatomas arose in the context of chronic HCV and thus some degree of fibrosis/cirrhosis. Among those patients treated by RFA alone, the average tumor size was 4.0 cm (range 2.3-6). Two patients underwent concomitant procedures (cholecystectomy in 1; placement of gold fiducials in 1). Totally laparoscopic resections were completed in 8 patients. None required conversion to open. The average tumor size was 4.2(range 2.9-5). Of these, 6 patients underwent anatomic resection (2 formal right hepatectomies, 2 posterior sectorectomies, 2 monosegmentectomies: seg 5, seg 2). Two other patients underwent non-anatomic resections both in segment 6.
Conclusion: Laparoscopic Bipolar RFA technology can be used as an adjunct to totally laparoscopic hepatic resections or tumor ablation alone. While multiple energy devices exist for tumor ablation or parenchymal precoagulation, only the Bipolar RFA device can be used efficiently for both purposes. Bipolar RFA is an excellent alternative to monopolar RFA technology and may be next in line as the preferred energy for treating liver tumors. 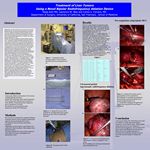