Transgastrostomic access in patients with an established gastrostomy tract has only been described recently in the literature. A novel approach enabled by advances in surgical endoscopy and minimally invasive surgery, it has been described for use in a variety of foregut procedures in case reports.

To the best of our knowledge there are no reported experiences of transgastrostomic removal of foreign bodies. We present the unique case of a young man in whom multiple foreign bodies were removed through an established gastrostomy tract under endoscopic guidance.

The patient is a 23-year old male with a history of Joubert’s syndrome, mental retardation, and dysphagia requiring percutaneous endoscopic gastrostomy (PEG) tube nutrition, who was brought in to the emergency department from his skilled care facility with reports of nausea, vomiting and fever. His caregivers reported multiple feeding tube replacement procedures as he was prone to pulling out his enteric access. A chest radiograph revealed a right lower lobe infiltrate and a nondescript mass in the gastric body. Computed tomography scan subsequently revealed multiple tubular foreign bodies within a severely dilated stomach.

Endoscopy revealed a dense entanglement of balloon-tipped catheters in the antrum. The existing feeding tube was removed and the stoma was dilated with a 6 mm bougie dilator, through which a 5 mm laparoscopic grasper was introduced. Under endoscopic guidance, a total of 74 feeding tube remnants were removed from the stomach, each approximately 24 cm in length. All remnants were removed without difficulty and inspection of the gastric lumen revealed only mild gastritis. A new, shorter gastrostomy feeding tube was placed.

Postoperatively, tube feeds were restarted and tolerated well. He was maintained on antibiotics for aspiration pneumonia and discharged to his care facility shortly thereafter.

In the current literature, flexible endoscopy is the accepted standard in retrieving foreign bodies in the upper gastrointestinal tract, with most experiences involving singular items. However, given the large quantity and the entangled nature of the foreign bodies visualized on endoscopy, retrieval was performed via a transgastrostomy route with endoscopic guidance. We found this route to be technically easier and less time-consuming. 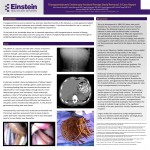