Introduction
There is evidence that short-term outcomes do not differ between experienced and inexperienced laparoscopic colorectal surgeons as long as they are closely supervised during their training. The aim of this study was to investigate if the experience level of the surgeons influences the long-term survival of colorectal cancer patients.
Methods
Prospectively collected data since the introduction of a laparoscopic colorectal service in 2006 was used for analysis. A majority of all resectable colorectal cancers were approached laparoscopically. Two laparoscopic surgeons trained 15 fellows (group A) and 13 senior colorectal surgeons (group B) and performed a number of cases as primary surgeons (group C). For short-term outcomes complications (minor and major), conversions, mortality, readmissions and reoperations were analyzed For long-term results overall survival and disease free survival were analyzed using Kaplan-Meier curves and Cox regression.
Results
537 cases were included in the analysis (A: 141, B: 162, C: 234). There was no difference for patient age, gender and ASA status and tumor stages were distributed equally among the groups. There was a higher proportion of rectal cancer for group C (A: 30.2, B: 29.8%, C: 50.4%, p<0.001). There was no intergroup difference for most short-term outcomes, but there was a slightly higher conversion rate in the expert group (see table). Median follow-up was 652 days. Overall, 3-year-survival was 81.9%; for both groups A and B it was 83.4% and for group C 79.9%. After adjustment for tumor stage and rectal cancer, there was no difference between the groups (Cox regression p=0.620).
Conclusion
Laparoscopic colorectal training is not only safe for short-term, but also for long-term oncological outcomes in a supervised and structured training environment. The slightly higher conversion rate in group C may represent a group of technically challenging cases. 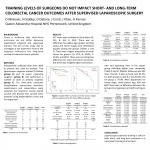