METHODS AND PROCEDURES: The records of 106 consecutive patients who underwent TLTG for gastric cancer between September 2006 and August 2012 were retrieved from prospective institutional database. Surgical outcomes of TLTG were retrospectively investigated. Postoperative morbidity was stratified by Clavien-Dindo classification system.

The indication of TLTG was T3(SS)N0 or earlier disease before April 2009. Subsequently, the indication range was extended to patients with more advanced diseases. Our TLTG consisted of D1+ or D2 lymphadenectomy in accordance with the Japanese Gastric Cancer Treatment Guidelines 2010 (ver. 3) and followed by intracorporeal esophagojejunostomy using a 45-mm linear stapler in functional end-to-end fashion or overlap method.

As for the degree of lymphadenectomy, either D1+ (n=78, 74%) or D2 (n=28, 26%) was completed. Concomitant splenectomy was performed in 7 patients (7%) and pancreaticosplenectomy was done in 3 patients (3%). As a combined resection, 4 cholecystectomy, 2 nephrectomy, 1 aderenectomy, 1 colectomy and 1 anterior resection of rectum were performed as well. Esophagojejunostomy was done in functional end-to-end fashion in 93 patients (88%) and in overlap method in 12 patients (11%).

CONCLUSIONS: Our results suggest TLTG is feasible and applicable for treatment of middle or upper gastric cancer. We await long term results to see oncological outcome. 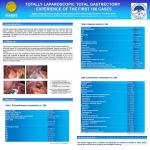