INTRODUCTION: Patients with achalasia are now increasingly followed up by Timed Barium Swallow (TBS) studies both before and after interventions for achalasia. Timed barium swallow has been found in multiple studies to help with the diagnosis of achalasia however very few studies have directly compared the Esophageal Function Testing (EFT) findings with TBS.

METHODS AND PROCEDURES: We carried out a retrospective analysis of all consecutive patients who underwent both EFT and TBS from January 2012 to September 2013 at our hospital. The electronic medical records of the patients were then subsequently reviewed to see what interventions were performed based upon the studies and how the patients did on post-procedural follow up.

RESULTS: Sixty-one patients were diagnosed with achalasia based on the EFT findings during the study period. Nineteen of them (10 females and 9 males) further had a TBS either because the diagnosis was not conclusive based on the manometric findings alone or as a baseline study before intervention for achalasia. The mean age of patients was 62 years. All 10 patients who had all the classic findings of achalasia on manometry including incompletely relaxing Lower esophageal sphincter (LES), abnormal peristalsis and poor bolus transit had clearly abnormal TBS with large columns of barium at both 1 and 5 minutes. In 2 patients who had heartburn as the primary symptom but early achalasia could not be excluded on manometry due to reduced bolus transit time (1 also had incompletely relaxing LES), TBS was normal suggesting acid reflux as the etiology of impaired esophageal peristalsis rather than achalasia. In 1 of 2 patients with dysphagia in spite of a previous history of Heller myotomy, the manometry was inconclusive since LES relaxed completely and although peristaltic waves were abnormal there was 60% bolus transit, in that patient the barium column had almost completely cleared at 5 minutes suggesting that a further procedure was unlikely to benefit the patient. Two patients with a short length LES and normal residual relaxing LES pressures but impaired peristalsis and very poor bolus transit, had abnormal TBS, and had relief of symptoms after a Per-oral endoscopic myotomy (POEM). Only 1 patient who had all classic findings of achalasia on manometry, although did have a short mostly intra-thoracic LES, had a normal barium passage on TBS; the patient had a Laparoscopic Heller myotomy with relief of dysphagia. 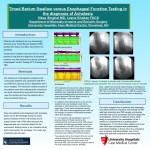