INTRODUCTION
Patients with a history of vertical banded gastroplasty (VBG) have a long-term complication rate of 30-55%. The majority of complications are related to the band and result in proximal gastric outlet obstruction. Symptoms of proximal gastric outlet obstruction include reflux, vomiting, and solid intolerance. These symptoms may result in poor nutrition. Alternatively, they may lead to a change in diet that results in weight regain. The purpose of this study was to assess the utility of UGI and EGD in the evaluation of VBG failures.

METHODS AND PROCEDURES
This is a retrospective study of all VBG patients that presented between March 2007 and June 2011. There were 82 patients total. All patients were specifically questioned regarding symptomatology. They all underwent EGD and UGI as part of their diagnostic work up.

RESULTS
Patients most often presented with symptoms of reflux (66%), solid intolerance (61%), and vomiting (44%). On EGD, 68% displayed gastric outlet obstruction or stricture at the band site, 26% had dilation of the pouch, 24% had band erosion. Hiatal hernia, staple line breakdown, gastritis, and esophagitis occurred less frequently. On UGI, reflux was found in 38% of the patients, while slow transit of contrast and stricture were found only in 21%. Hiatal hernia and staple line breakdown were seen less frequently.

CONCLUSION
Although UGI may provide information regarding reflux and anatomical changes to the stomach, it does not correlate well with extent of obstruction at the band site. While EGD demonstrated that 68% of patients had gastric outlet obstruction or stricture, UGI only showed 21% with either slow transit of contrast or stricture. Moreover, when 66% of patients presented with reflux symptoms, UGI only documented 38% with reflux. EGD, on the other hand, provides an accurate diagnosis of the degree of proximal gastric outlet obstruction, as well as the option for therapeutic intervention should there be an eroded band. 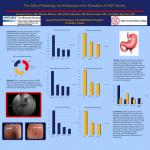