Introduction: While the identification of lymph node metastases is prognostic, there is considerable controversy regarding the extent of lymph node resection in the surgical management of esophageal cancer. In this single-institution study, we examine the significance of total number of lymph node counts on survival in patients with lymph node negative esophageal carcinoma (American Joint Committee On Cancer TNM stage I-IIA).

Methods: From May 1991 and April 2009, a total of99 patients with lymph node negative esophagealcancer (38 squamous cell carcinoma [SCC], 56 adenocarcinomas [AC], 5 other types)underwent a standardized surgical resection involving esophagectomy with a mediastinal adventitial resection and lymph node dissection were identified from a propectively maintained electronic database at our institution. The patients were classified into 3 groups according the number of lymph nodes resected during surgery (1-10, 11-17, >17 lymph nodes). Overall patient survival, defined as the date of esophagectomy to the date of death, was compared among these lymph node groups by using the Kaplan Meir method with Log Rank test. Cox regression analyses wereperformed to evaluate the association between survival and the number of negative lymph nodes after adjusting for potential confounders.

Upon multivariate analysis, the number of resected negative lymph nodes was independently associated with better survival after adjusting for potential confounders including sex, age, histological type, histological differentiation, T classification, lymphovascular invasions, neoadjuvant radiotherapy and chemotherapy and adjuvant chemotherapy. There was reduced hazard of death with increasing number of examined lymph nodes. Compared to patients with 1-10 lymph nodes, the death hazard was decreased by 51% and 79% in patients with 11-17(HR: 0.49, CI:0.25-0.96, P value =0.001) and >17 (HR: 0.21, CI 0.09-0.05, P Value=0.001)lymph nodes respectively.

Conclusions: The current studydemonstrates that a greater number of negative lymph nodes removed during esophagectomy is associated with improved overall patient survival. Data from current study suggest that at least 18 lymph nodes should be removed in patients undergoing surgical resection for esophageal cancer 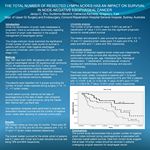