Laparoscopic surgery benefit surgeons due to the magnifying effect of the targets and knowledge of micro-anatomy accumulated through high quality visualizations under HD image. Thus, by performing laparoscopic surgery with fine and accurate manipulation, surgeons could pursuit high quality and convincing procedures yield to the procedures conducted by conventional operation through major laparotomy, even at surgical treatment for malignant tumors. However, acquisition of appropriate technique for laparoscopic surgery is challenging and surgeons should at least aware of laparoscopic-surgery specific weak point such as less sense of touch, difficulty of acquisition of wide and bird visualizations to accomplish safe and adequate procedure. To overcome these issue, standardization of laparoscopic surgery-specific technique is indispensable.

With regards to surgical technique for colon cancer, lymph node dissection thought to be critical, since lymph node metastases from primary lesion are linearly co-related to the prognosis of patients. According to the recent emerging concept about lymph node dissection, surgeons could perform dissection by carefully tracing the “embryologic tissue plane” to accomplish complete mesocolic excision (CME) and central vascular ligation (CVL) which thought to be indispensable for curative resection for colon cancer, worldwide. Actually, CVL+CME have much in common with Japanese D3, a traditional concept in Japan. The pivotal point, common in both concept, is that procedure on mesocolic mobilization and that on vascular ligation should be divided clearly to achiving fine and accurate lymph node dissection.

Here, we present detailed ingenuity to achieve convincing lymph node dissection around inferior mesenteric artery (IMA) for advanced left-sided colon cancer under laparoscopic condition. First, to start medial to lateral approach, peritoneum around IMA was incised from caudal side to duodenal recess. By doing this, the angle between Aorta and IMA was maximized, in this line, injury of hypogastric nerve was easily avoided. Second, by using the magnifying effect, the border between the lymph tissue around IMA and paraaortic lesion, which is separated by pre-hypogastric nerve (HN) facia, was finely and carefully traced and dissected. With these procedures, ideal CME+CVL around IMA is feasible without any injury of hypogastric nerve.

From 2004 to 2011, 511 laparoscopic surgery for advanced colon cancer were performed. The mean operative time was 175mins and the mean blood loss was 30g. Five-year disease free survival rate was 86.7% at stageII and 76.1% at stageIII, respectively. In the presentation, we also show representative movie of the case of standard sigmoidectomy accompanied with CME+CVL. 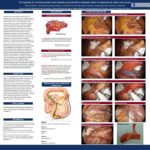