The Impact of Simulator Based Electrosurgical Training on Resident Education

Currently there is no standardized training for learning safe practices while performing electrosurgery and very little information on this topic in surgical textbooks. The objective of this study was to evaluate the efficacy of training on an interactive computer module versus a didactic surgery curriculum on the subject of electrosurgery. We hypothesized that training with an interactive computer simulator is equally, or more, effective than learning from textbooks alone.

Twenty eight surgery/ob-gyn residents participated. The subjects were randomly assigned to one of two groups: simulator training plus didactic and didactic alone. Subjects in both groups took a pre-test (paper-and-pencil multiple choice test) to evaluate their baseline knowledge in safe practices in electrosurgery. The residents then either read excerpts from standard surgery textbooks, or did the reading along with hands-on simulator training. The simulator was an interactive 3D environment with virtual tools and square and circle objects, designed to demonstrate various electrosurgical failure scenarios, all of which were also described in the reading. Immediately after training, subjects took a post-test, and two weeks later a retention test. Test score was measured for pre, post and retention tests for both groups. A two-way mixed factorial ANOVA was completed using the IBM PASW 18 software. Significant main effects (p < 0.05) were further analyzed using Bonferroni method with corrections.

There was no significant difference between the two groups (p = 0.334). Pre and post tests were significantly different for all subjects combined (p < 0.001). No difference in scores was found between post test and retention test results (p = 0.278). Both groups rated enjoyment of training with a median of 3 on a 5-point Likert scale.

The pre-test scores indicate that residents are insufficiently educated about electrosurgical safety. Test scores improved for both the simulator with didactic and didactic alone groups, indicating that new knowledge was retained by both groups equally. However, the simulator training did not provide any discernible advantage. After their poor initial test performance, clinical relevancy may drive residents to learn rather than the way the content is delivered.

Table 1. Mean ± Std of scores for pre, post and retention tests for both the groups 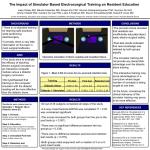