The impact of perioperative factors on morbidity and mortality after laparoscopic surgery.

[Background] It is well known that older patients are more likely to have chronic disease. The population of elderly people is growing rapidly in Japan recently, and this results in increasing number of patients with comorbidity who undergo surgery. Although laparoscopic approach is minimally invasive, it is unclear whether laparoscopic procedure is safe for elder patients with severe comorbidity.

[Patients and Methods] To analyze the impact of comorbidity on the perioperative complication rate after laparoscopic surgery, patient records of 359 patients who underwent laparoscopic surgery at the Department of Surgery in Tohoku University Hospital between April 2010 and August 2012 were reviewed retrospectively.

[Results] There were 202 men and 157 women, and their median age was 63 y.o. (15-92 y.o.). To these patients, 381 procedures, including 101 cholecystectomies, 99 colorectal surgeries, 87 gastrectomies, 29 hepatobiliary pancreatic surgeries, and 65 miscellaneous procedures, were performed. Overall morbidity, severe morbidity (Clavien-Dindo classification IIIa or higher), and mortality rate were 26.9%, 9.7%, and 0.2%, respectively. According to the American Society of Anesthesiologists (ASA) score, these patients were divided into two groups (low-risk group: ASA score I and II, 292 patients; high-risk group: ASA score III and IV, 67 patients). Age, gender, and intraoperative blood loss were comparable between low-risk and high-risk group, but body mass index (22.8±3.3 vs. 27.7±9.8) and operative time (179±73 vs. 214±117 min.) were significantly higher in high-risk group. There were no significant difference between two groups in terms of overall morbidity (25.3% in low-risk group; 34.3% in high-risk) and severe morbidity rate (9.9% in low-risk group; 8.9% in high-risk). Other preoperative factors, such as age, gender, body mass index, and emergency operation, had no significant effect on overall and severe morbidity rate. On the other hand, postoperative complications were significantly more frequent in the patients with long operative time (greater than 3hr) and patients with large amount of intraoperative blood loss (greater than 100g), although no significant difference was observed in severe morbidity rate of these patients. The multivariate logistic regression analysis identified large amount of blood loss (odds ratio 2.09[95% CI 1.18 to 3.68]) and long operative time (odds ratio 1.91[95% CI 1.10 to 3.35]) as independent risk factors in postoperative complication. 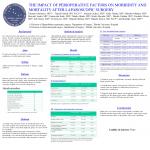