The First Decade of Laparoscopic Pancreaticoduodenectomy in the United States: Costs and Outcomes Using the Nationwide Inpatient Sample

INTRODUCTION: Minimally invasive pancreaticoduodenectomy (PD) remains an uncommon procedure, and the safety and efficacy remain uncertain beyond single institution case series. An analysis on national costs and outcomes of minimally invasive PD has yet to be studied. Fears persist that longer operative times and instrument costs make LPD cost-ineffective. The aim of this study is to compare outcomes and costs between laparoscopic (LPD) and open PD (OPD) using a large population-based database.

METHODS: The Nationwide Inpatient Sample (NIS) database (a sample of approximately 20% of all hospital discharges) was queried to identify patients who underwent PD from 2000 to 2010. Total hospital charges were adjusted to 2010 dollars. Patient demographics, comorbidities, hospital characteristics, inflation-adjusted total charges, and complications were evaluated using univariate and multivariate analyses. Hospitals were categorized as high volume hospitals (HVH) if more than 20 PD were performed annually, while those performing less than 20 PD were defined as low volume hospitals (LVH).

Stratifying outcomes by hospital volume, LPD at LVH resulted in longer hospital stay (13 d at LVH vs 9 d at HVH, p<0.001) and significantly higher charges ($106,367 at LVH vs $76,572 at HVH, p=0.016; Figure 2). On multivariate analysis, after controlling for demographics and comorbidities, teaching status and HVH correlated with low risk of morbidity and mortality. Blood transfusion and LVH were independent predictors of mortality. 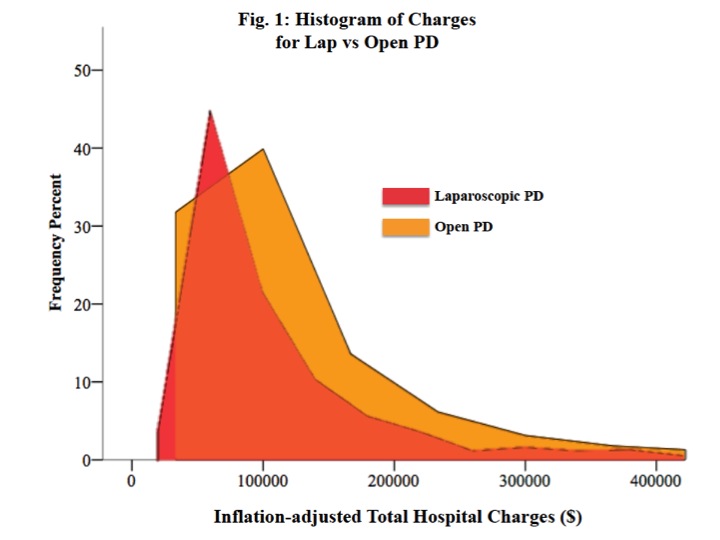 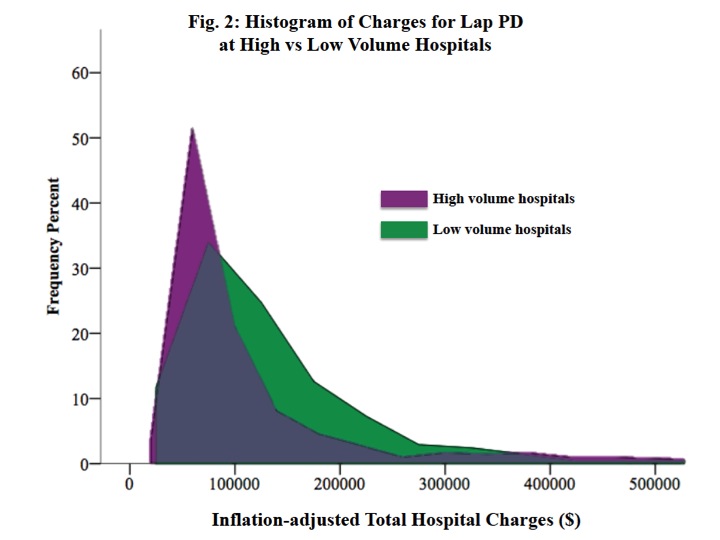