The Establishment of a Training System for Single Port Surgery (sps) Using a Tissue Laboratory Model.

Objectives: Single incision laparoscopic surgery has widely accepted in various abdominal surgeries. However, there had been few training system for SILS. We have established and evaluated a tissue laboratory model for SILS.
Methods: Training tasks included SILS cholecystectomy using a training box provided with a porcine liver with the gallbladder and ligation by cross over technique using articulating graspers. Between September 2009 and August 2010, we held SILS training course three times. Useful ness of the training course was evaluated by questionnaire after the course and the situation of the induction of SILS surgery was evaluated 6 months after the course. The time for ligation was also evaluated pre and post training course.
A total of 43 surgeons from 13 hospitals who had no or little experience with SILS attended our training course. Each surgeon completed SILS cholecystectomy during the course. All participants satisfied with the training course. SILS was introduced in 9 hospitals (62.9%) 6 months after the training. More than 10 SILS cases was performed I n 5 hospitals. Most of the surgery was cholecystectomy, however, appendectomy, colectomy and groin hernia were also performed in a few hospitals.
Ligation time was significantly improved after the training (from 94±15 to 40±5 sec: p=0.0013).
Cost for our tissue laboratory system was 200,000 Japanese yen, which was less than 1/10 of animal laboratory model for SILS.
Conclusion
Our training system for SILS is useful for introduction SILS and also cost effective. 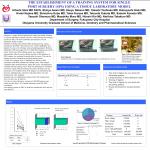