Background
Bilateral laparoscopic adrenalectomy (BLA) is an effective therapy for the management of persistent hypercortisolism in patients after failed transphenoidal pituitary tumor resection for Cushing’s disease. Extracortical adrenal tissue has been previously identified as a source of persistent hypercortisolism and, if not resected along with both adrenal glands, may lead to treatment failure. We report a reliable and reproducible technique for BLA in patients with Cushing’s disease which reduces the likelihood of retained extra-adrenal cortical rests and may reduce intraoperative complications.

Methods
A 10 year retrospective review of all patients who underwent BLA at a single tertiary care center was performed. All patients underwent BLA utilizing the psoas sign technique and all procedures were performed using 4 ports replicating these predetermined surgical steps:
1. Identification of the inferior pole of the gland.
2. Identification of the inferior aspect of the adreno-caval groove on the right or the adrenal vein/renal vein confluence on the left.
3. Division of the adrenal vein.
4. Dissection and removal of the adrenal gland in a circumferential manner with clearance of all retroperitoneal fat overlying the psoas muscle.

Results
Between October 1996 and December 2006, 85 patients underwent BLA for refractory Cushing’s disease . Patients were predominantly female (77 of 85) and had a median age of 41 years (17-72).There were 3 intraoperative complications (3.5%) and 2 conversions to an open procedure (2.4%). There was one death. Three patients were identified as having extracortical rests of adrenal tissue within the retroperitoneal fat (3.5%). Mean operative time was 260 minutes (standard deviation 71.59, n=61) and the median estimated blood loss was 50 mL (10-350 mL).

Conclusions
The psoas sign technique provides a clear view of the adrenal fossa and facilitates dissection of the anatomic planes around the adrenal gland. This technique is feasible, reproducible and in our experience allows for safe removal of both adrenal glands and all surrounding extracortical adrenal tissue. 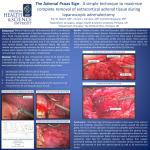