BACKGROUND: Endoscopic surgery has developed dramatically during the past decade due to its many advantages. Endoscopic surgery requires unique new skills that differ from those of open surgery, and therefore, professional education/training is very important. However, since qualified instructors are not necessarily available for teaching this technique, differences in surgical skill level between different areas of the same country and between nations is evident. Real-time telementoring provided by an instructor from a distant location or foreign country may help to solve such problems. METHODS: The same box trainers were set at both site in Chulalongkorn University in Thailand and Kyushu University in Japan. A high speed Internet, JGN2 (Japan Gigabit Network 2) was used as an information transmission channel in this tele-mentoring between Thailand and Japan. Twelve Thai surgical residents, who had no experience of operator in endoscopic surgery, were randomly divided into the following two groups: training group (TR)(n=6); The subjects were trained using the box trainer with the annotation system, Control group (CTR) (n=6); The subjects had no practical training. The expert surgeon in Japanese site taught a suturing and knot tying to each trainee in TR group for 20 minutes, using the annotation system. Since the character or the arrow necessary for guidance, which the expert surgeon drew using the pen on the pen tablet directly, are simultaneously displayed on the trainee’s monitor, the trainee can see guidance contents intuitively. The trainee in CTR group learned the procedure of the suturing and knot tying only by the video for 5 minutes. After the training, the suturing skill in all trainees was assessed with suturing and knot tying using the box trainer. The success rate and the time to finish the suturing task were recorded. RESULTS: All trainees were right-handed. The rate of completion of the assessment task with the same procedure which the trainer showed was significantly higher in the TR group compared to that in CR group (p<0.05). The average time taken to complete the knot tying after the tele-mentoring was significantly shortened in the TR group (p<0.05), however there was no difference in grabbing of the needle and stitching through the dots between two groups. CONCLUSION: In the present study, the results indicated that the tele-mentoring in the long distance (3750 km) using the box trainer was significantly effective. We found that the annotation system could be also effective tool for the education of endoscopic surgery. 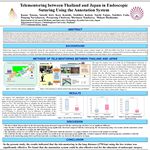