Background: Roux-En-Y-Gastric Bypass (RYGB) and Sleeve Gastrectomy (SG) are commonly performed bariatric procedures that are associated with a significant learning curve. The effect of surgeon experience on perioperative outcomes and safety is established, but the impact of trainee participation during surgery remains unclear. The purpose of this study was to assess the effect of trainee operative involvement on early perioperative safety and outcomes of bariatric surgery.

Methods: The MBSAQIP 2015 public use file was used to identify non-revisional laparoscopic and robotic RYGB and SG procedures. Comparisons were made based on the type of assistant level (resident, fellow, or professional assistant including co-surgeon, nurse first assistant or physician extenders).  Clinical outcomes include anastomotic/staple line leak, 30-day readmission, 30-day re-operation, 30-day intervention, any complication, overall event, operation length, and days to discharge from operation. Multivariable regression model was used for each clinical outcome.

Results: There were 35,354 laparoscopic RYGB, 2,896 robotic RYGB, 79,717 laparoscopic SG and 5,449 robotic SG procedures examined. 21,257 (17%) and 11,322 (9%) of all the procedures were performed with a resident or fellow, respectively. Trainee participation was associated with prolonged operative duration (Table 1). Fellow presence was independently associated with the development of complications for all procedure types except robotic SG. The most common complications were urinary tract and wound infections. The effect of the fellow was more pronounced for robotic compared to laparoscopic RYGB (OR 2.2 vs 1.3). This negative effect of fellow on overall complications was eliminated after accounting for operative duration. There was no effect of the fellow on all the other metrics examined, including anastomotic/staple line leak, readmission, re-operation or re-intervention for any procedure type. In laparoscopic SG, resident participation was associated with higher leak, readmission, re-intervention and overall complication rate. This effect persisted even after accounting for procedural duration. In robotic SG, there was no effect of trainee (resident or fellow) on outcomes.

Conclusions: Although minimally invasive fellow training is associated with higher overall complication rate, there is no such effect on major safety benchmarks, including leak rate, readmission and re-operation. In contrast, the impact of resident trainees on SG outcomes is substantial. Operative involvement of trainees in bariatric surgery leads to different outcomes based on trainee level, and this needs to be taken into account during the programmatic design of bariatric centers and educational curricula. 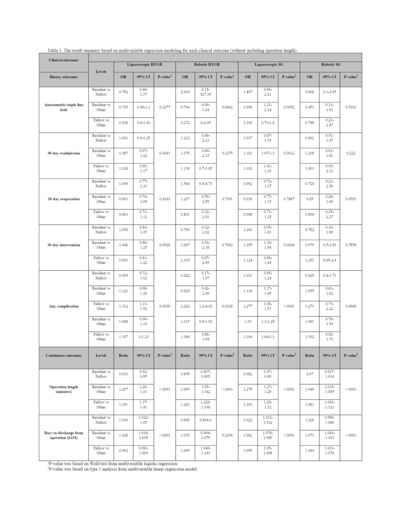