Introduction: It is widely known that surgical smoke (SS) generated by energy devices e.g. electrocautery (EC) and laparoscopic coagulating shears (LCS), includes harmful chemicals such as aldehydes and NOx. It has been recommended to recover SS actively from the point of view of risk management. However, details are not known whether SS contains viable tumor cells and/or infectious substances such as bacteria and virus. This study was aimed to clarify whether SS contains potentially bio-hazardous components such as tumor cells and viral particles.

Materials and Methods: [Tumor study] This was an ex-vivo animal study. Liver cell carcinoma cell line “PLC/PRF/5” were implanted subcutaneously in Nod/SCID mice (n=5). Tumors were intentionally ablated for 3 minutes to generate SS using EC or LCS. SS was bubbled in nuclease-free water (Ultra DW, GIBCO) via a semi-closed system with negative pressure of 10kPa. DNA was then extracted from the recovered fluid, and polymerase chain reaction (PCR) was carried out using specific primers to amplify the sequence within HBs gene of PLC/PRF/5 (200bp), those grossly band was confirmed by electrophoresis. [Virus study] This was IRB-approved, ex-vivo study using human samples. The surgically resected fresh liver samples with HBV infection were used (n=6). SS was generated by ablating non-tumorous component of the resected liver with EC or LCS in the bench-top setting. SS recovery process was performed in the same manner as Tumor study. Detection of HBV-DNA and HBs antigen in the bubbled fluid, was attempted using standard PCR method or CLIA/CLEIA method, respectively. 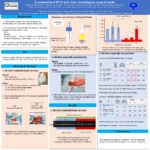