Surgical Simulation Got You Stressed? Role of Skin Conductance As A Stress Indicator in Surgical Education.

Background: Safe surgical practice requires a combination of technical and cognitive abilities. Both sets of skills can be impaired by intra-operative stress, compromising performance and patient safety. One of the ways to safely document and evaluate stress is to measure it in a simulated setting. We sought to observe the effect of stress on surgical interns while performing surgical simulation skills

Methods: This study was conducted alongside an objective assessment (Surgical Olympics) event which consisted of 11 stations: suturing, open knot tying, written test, imaging test, laparoscopic PEG transfer etc. Sixteen first-year residents with <1 month experience wore skin conductance monitors on their forearm. Stress was recorded by these monitors continuously throughout the event and averaged for every station. The most/least stressful stations were defined as number of residents who had the highest/lowest plus second highest/lowest stress levels respectively while performing on that particular station.

Results: Among 16 interns, 6 had the highest stress levels for the video commentary station and 6 had highest stress levels for the PEG transfer station. Interestingly, laparoscopic knot tying station was the only station at which no intern was maximally stressed. Seven interns found the imaging station least stressful and 4 interns were least stressed at the written test station, lap knot tying and fascial closure (1 X 1 cm) station.

Conclusions: Video commentary, where participants looked at a short video of a surgical procedure and answered goal directed questions, was the most stressful station. While directed questions are stressful, interns may have felt more comfortable at other stations where they had a good idea of what to expect (obvious by names). The laparoscopic PEG transfer station tests a skill which is rarely practiced as a medical student and hence the interns felt higher stress levels.  The lower stress levels for imaging and written tests might be explained by the fact that they are knowledge based stations only and do not require a skill set. Surgeons are subject to many intra-operative stressors that can impair their performance; more insight into the relationship of stress and performance is a critical factor for the quality of health care. 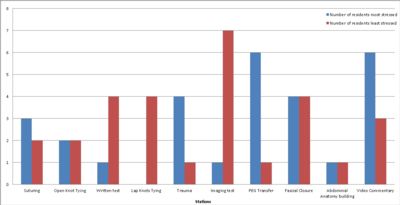