PURPOSE: Three-dimensional (3D) visualization has been shown to improve surgical performance. The effectiveness of 3D endoscopy has previously been measured by conventional criteria such as the path lengths of the operative instruments, the number of loose or inaccurately placed sutures among other skill-based errors. However, the quality of suture task performance, i.e., the effectiveness of the suture itself, has never been evaluated using 3D vision. This study uses our newly developed alternative and more clinically applicable method of suture task performance analysis (Fig. 1). The system evaluates performance quality using pressure-measuring and image-processing devices in combination with an artificial intestinal model. By measuring four criteria that define an effective suture as well as suture task completion time, the efficacy of 3D vision can be evaluated and compared with conventional laparoscopy (Fig. 2). 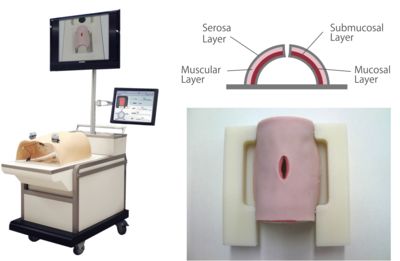 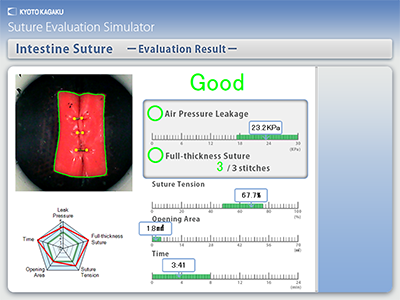 The purpose of this study was to suggest a novel measurement methodology of performance evaluation of medical equipment using a new computerized objective assessment system.

The performance scores of each group in both conditions were then compared.

CONCLUSIONS: The usefulness of the 3D endoscope was evaluated objectively and quantitatively using the objective skill assessment system.

3D endoscope might be superior to 2D endoscope for performing laparoscopic surgeries intuitively.

Our proposed suggestion would be an effective way to evaluate the performance of medical equipment.