Case: A one-year-old girl was prenatally found to have abnormal vascular formation via ultrasonography, which was most likely a port systemic shunt in the liver. After a cesarean section delivery at full term, a 4.8-mm abnormal vessel was detected in the left lobe of the liver. Using enhanced computed tomography, this abnormal vessel was diagnosed as a port systemic shunt between segment 3 of the portal vein and the left hepatic vein. The serum transaminase and galactose levels were within the normal range, but the NH3 levels were elevated slightly above the normal range. The patient was observed conservatively in the hope of spontaneous closure of the shunt vessel, but the shunt vessel gradually enlarged into an aneurysm shape. The serum NH3 and total bile acid levels were in the abnormal range despite a normal liver function (transaminase). In addition, the patient was found to have progressive metabolic acidosis based on the lactate data, so surgical intervention was applied to close the shunt vessel.

Operative findings and procedure: The patient was place in a broad base position, and a 10-mm 30° laparoscope was inserted through the umbilical incision using the open 12-mm Hasson trocar method. Pneumoperitoneum was established at 8 mmHg CO2 inflation. Under inspection with a laparoscope, the shunt vessel was easily recognized at the surface of lateral segment 3. Initially, transection or stapling for only the shunt vessel was intended. However, given the intraoperative findings, uncontrollable hemorrhage was expected during shunt vessel dissection. We therefore performed lateral segmentectomy for safe and secure transection of the shunt vessel. Based on the findings of repeated laparoscopic ultrasonography, liver dissection was performed. The surface area was dissected using an ultrasonically activated device. The deep portion was dissected by CUSA, and hemostasis was by bipolar. Finally, the shunt vessel was stapled using a linear stapler (Powered Echelon; Ethicon), and lateral segmentectomy was completely performed. The dissected surface was coagulated using an Argon beam coagulator, and the lateral segment was extracted through the Pfannenstiel incision.

Results and Conclusion: There were no intra- and postoperative complications. The postoperative course was uneventful, and the patient showed a good clinical course. The serum transaminase and lactate levels were immediately normalized. Cranial magnetic resonance imaging showed no manganic deposition. The intra-hepatic shunt vessel was difficult to approach in the present case, and laparoscopic hepatectomy is one method for resolving a shunt vessel. 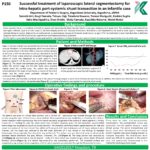