Objective: We describe our strategy and experience using the da Vinci S system to develop a completely robotic gastric bypass technique in a stepwise fashion.
The first robotic bariatric procedure was performed in1999 by Cardiere.1 The wristed movement and 7 degees of motion, enhanced high definition optics, superior ergonomics, and numerous other advantages have been previously described.2 Additionally, there has been a large case report showing a zero percent mortality and zero percent leak rate in over 500 robotic roux en Y gastric bypasses.3 Since the first robotic procedure, however, there has not been a significant application of robotic technology to bariatric procedures. Part of the slow adoption of robotic technology in bariatrics may be due to limitations in operating in multiple quadrants, lack of tactile feedback, and long operative times. These challenges may have contributed to the scarcity of totally robotic gastric bypass techniques. Hybrid techniques, in which portions of the procedure are completed robotically and portions are completed laparoscopically, have had little appeal to most bariatric surgeons.

Six totally robotic cases were performed. Console time for the first case was 125 minutes. Cases 2-6 took an average of 106 minutes (range: 104-107 minutes). The gastro-jejunotomy was performed in an average of 24 minutes in these six cases.

Conclusions: The conversion from laparoscopic to totally robotic gastric bypass surgery can be achieved in a stepwise fashion to limit prolonged operative times over a relatively short experience. 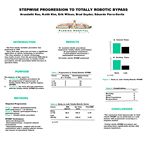