Introduction: For the transabdominal preperitoneal repair (TAPP) for inguinal hernia, single port surgery (SPS) has been reported to reduce the abdomnal wall damages. So that, we introducced the SPS plus one puncture (POP-SPS) method as a new procedure.

Patients and Methods: From May 2014 to August 2016, 123 cunsecutive TAPP patients were retrospectively investigated. There rere 92 single side inguinal hernia and 31 had both sides. As the POP-SPS TAPP, we use two 5mm ports (1 for the scope and i for the forceps) through an umbilical multi-channel port and additional 2.4mm needle instruments is pierced above the pubic bone. A 5mm flexible scope allowed us to keep the triangular formation easily. We studied the safety and usefulness of this method from the viewpoints of operation and the complications.

Results: Median operation time of single side hernia was 77 min (38-152) and the bilateral case was 139 min (91-269). Three cases needed one or two additional 5mm ports, and one case with severe preperitoneal adhesion due to the previous prostate cancer surgery was converted to open method because of the venous bleeding. Other complications were 1 spermatic cord injury and 1 postoperative seroma that required the percutaneous puncture. Umbilical scars and the pierced needle instrument scars became gradually invisible within 1 or 2 months. There were no incisional hernia nor wound infections in our series. These data was comparable ti the conmventional laparoscopic hernia repairs in our facility.

Conclusions: Operation scars of POP-SPS had better cosmesis then the conventional TAPP or SPS TAPP, and there were no difference between POP-SPS TAPP and conventional method in operation time and the complication rate. POP-SPS TAPP was demonstrated as a novel minimally invasive approach for laparoscopic inguinal hernia repair. 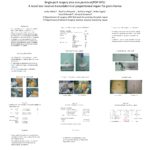