Objectives: Laparoscopic cholecystectomy has replaced open cholecystectomy as the standard procedure for gallbladder removal whenever possible. Recent developments regarding laparoscopic cholecystectomy have been directed toward reducing the size or number of ports to achieve the goal of minimally invasive surgery. The first successful case of single port access (SPA) Laparoscopic Cholecystectomy in the Philippines was done at FEU-NRMF Medical Center in August 2008 and became almost the standard in the surgery of the gallbladder. The goal of this prospective randomized controlled clinical study is to evaluate the real benefit of single port access as compared to standard three-port technique without compromising the safety in cases of laparoscopic cholecystectomy in terms of pain, recovery, and patient satisfaction.
Methods: Seventy-five consecutive patients who underwent elective laparoscopic cholecystectomy were randomized to undergo either the SPA or the standard 3-port technique. Three surgical tapes were applied to standard 3-port sites in both groups at the end of the operation. All dressings were kept intact until the first follow-up 1 week after surgery. Postoperative pain at the 3 sites was assessed on the first day after surgery by using a 10-cm unscaled visual analog scale (VAS). Other outcome measures included analgesia requirements, length of the operation, postoperative stay, and patient satisfaction score on surgery and scars.
Results: Demographic data were comparable for both groups. Patients in the standard threee-port group had shorter mean operative time (47.3±29.8 min vs 60.8±32.3 min) for the SPA group (P=0.04). SPA group had less pain at port sites on 12 post-op (mean score using 10-cm unscaled VAS: (2.19±1.06 vs 2.91±1.20 P=0.02). Overall pain score, analgesia requirements, hospital stay, and patient satisfaction score on surgery and scars were similar between the 2 groups.
Conclusion: The study showed that single port access (SPA) laparoscopic cholecystectomy is comparable and has similar clinical outcomes to the standard three port laparoscopic cholecystectomy in the surgical treatment of cholecystitits. Added advantages are reduced need for analgesics and a virtually scar-less surgery. 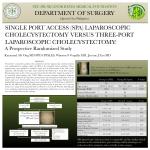