CASE PRESENTATION: A 71-year-old man was admitted to our hospital for his stomachache. On Computed Tomography (CT), we found that his colon and small bowel were filled with intestinal liquid due to obstruction caused by descending colon cancer. We inserted a stent to alleviate the obstruction, which took ten days. Before the operation for the colon, we did gastroscopy and found gastric cancer, 2 x 2 cm in size, 4cm from the esophagus-gastric junction. It was confirmed as poorly differentiated adenocarcinoma by biopsy. No lymph node swelling or metastatic lesion was found on CT. Our diagnosis: gastric cancer cStage1A (T1 N0 M0) and colon cancer cStage2 (T4a N0 M0).

The trocar positions are shown in the following figure. 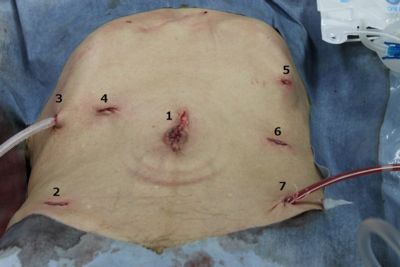 Umbilical port (No.1)- we inserted a laparoscope from this port and performed extracorporeal anastomosis on colorectal resection. We used 12mm trocars (Nos.2, 4, and 6) and 5mm trocars (Nos.3, 5, and 7). For gastric cancer, we performed laparoscopic total gastrectomy with D1+ lymph node dissection and Roux-en-Y reconstruction under Japanese guidelines. Simultaneously, for colon cancer, we performed laparoscopic left colorectal resection with D3 lymph node dissection and functional end-to-end anastomosis. There were no serious troubles during the operation: the operating time was 586 minutes and the estimated blood loss 200ml. On postoperative day (POD) 2, we performed upper gastrointestinal series, and found no leakage from the esophageal gastrostomy and the small intestinal anastomosis. On the same day, the patient started to drink water at lunch, and oral liquid diet at supper. He was discharged on POD7. Pathological examination of the stomach showed moderately differentiated adenocarcinoma invading the lamina propria and that of the colon moderately differentiated adenocarcinoma invading the serosa.  Under Japanese guidelines, our final diagnosis was T1 N0 M0 fStage1A for the stomach cancer and T3 N0 M0 fStage2 for the colon cancer. Recurrence has not been found for 8months since the operation.