Should We Recommend LAGB Hiatal Hernia Repair for Overweight Patients with GERD?

Methods Since September 2008, the author has completed 85 posterior crural repairs at the time of LAGB placement. 41 of these patients were medicated for GER prior to surgery. This retrospective review with average follow-up of 62 weeks (8-191wks.) examines the success of this procedure in these 41 patients in treating GER and defines success as cessation of GER medications and absence of symptoms.

Results The 85 patients including 11 males and 74 females were on average 50 years of age and carried a BMI of 47 ((36-68). In all cases the patients had either symptomatic GER, a positive preop UGI series, a positive balloon test using the calibration tubing kit that comes with the band using 10 cc of air in the balloon, or a visible anterior dimple at the esophago-gastric junction. Repair was performed using a posterior approximation of the crura with1-3 permanent sutures. When identified, herniated fat pads were reduced and resected. 36 of the 41 (88%) patients who were on preop GER medications now are taking no GER medications. 5 (12%) patients report that their symptoms of GER are much better than preop but remain on a GER medication. Successful reflux outcomes are noted long before significant weight loss occurs. The mechanism of successful repair may involve the reduction of the hiatus hernia size and the anterior plication of the band, which prevents the cephalic migration of the anterior stomach that creates LES incompetency.

Conclusion Early results suggest the LAGB may be an effective treatment for management of symptomatic GER in obese patients and should be considered as a frontline therapy for GER in these patients and possibly for the overweight (BMI 25-30) in whom a Nissen has a higher failure rate and who could benefit from sustained weight loss. 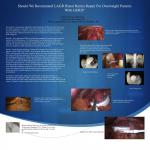