BACKGROUND: Thoracoscopic esophagectomy (TSE) for esophageal cancer has been spread as a less invasive surgery compared with conventional open thoracotomy approach. We have introduced the TSE in prone position since July 2009.

METHODS: Our procedure consists of three steps. The first step is neck dissection including lymph nodes around the recurrent nerve. The second step is TSE with mediastinal lymph nodes dissection. The third step was laparoscopic gastric mobilization and gastric tube formation followed the neck esophago-gastric tube anastomosis. We retrospectively reviewed 46 consecutive patients who underwent esophagectomy by TSE for esophageal cancer between July 2009 and July 2013 at Kochi Medical School to analyze the outcomes. 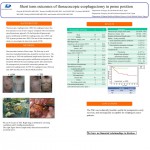