Background: As average lifespan has become longer, laparoscopic colorectal surgery (Lap-CS) has been also applied to elderly patients (Pts). Elderly Pts, however, often have comorbidity such as heart, pulmonary, and metabolic diseases. Indication of Lap-CS to elderly Pts is still controversial, because laparoscopic operation usually require long time and increased intraabdominal pressure, both of which might be related to postoperative morbidity. Aim of this study is to assess safety and validity of Lap-CS for elderly Pts.

Method: Medical records of 192 Pts who underwent Lap-CS since 2003 to 2016, were retrospectively reviewed. Pts were divided into two groups by age; group A (>80), and group B(<80), and we compared Pts preoperative general condition and peri-operative outcomes between two groups. Two-tailed Student’s test and/or Pearson’s chi-square test were used for statistical analysis.

Conclusion: Short-term outcomes of Lap-CS in elderly Pts were not different from those in young Pts in site of poor preoperative general condition in elderly Pts. These results suggests that Lap-CS could be an alternative operation indicated for Pts with comorbidities. 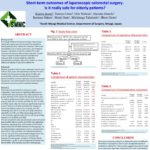