Background: Laparoscopic colorectal surgery for malignancies (LAC) has been widely accepted. However, depending on increased cases or expanding indications, converted cases has been experienced. We assessed converted cases comparison to completely performed cases in LAC.
Method: All the patients, who underwent LAC between January, 2005 and June, 2011, were entered into a database and several parameters were collected. In these periods, 259 patients underwent LAC. Hand-assisted case and simultaneous surgery were excluded in this study.
Results: In 259 patients, hand-assisted cases were performed in 2 patients and simultaneous surgery cases were performed in 4 patients. There were 22 converted cases in 253 patients (8.7%). Reasons for conversion were as follows: severe adhesion/previous open surgery in 11 cases (4.3%), hemorrhage, obesity, and other organ injury in 3 cases, respectively (1.2%), and difficulty of maneuver in 2 cases (0.8%). According to the classified by performed operation, right hemicolectomy was in 7 cases (31.8%), sigmoidectomy and anterior resection were in 5 cases, respectively (22.7%). Comparing conversion cases and completely performed cases, only BMI affected the conversion (24.3 vs. 22.7, p=0.048). Age and tumor size did not affect the conversion. In perioperative results, the conversion acted on the operative duration (243min. vs. 195min., p=0.0078), the estimated blood loss (286.5g vs. 57.7g, p<0.0001), and the postoperative hospital stay (15days vs. 12days, p=0.009). The anastomotic breakdown was not influenced by the conversion.
Conclusion: Severe adhesion/previous open surgery cases consisted half of converted cases. It was thought that expanding indication was the reason. Preoperative decision making will be needed for predicted conversion cases avoiding extended operative duration, unnecessary bleeding and extended hospital stay. High BMI cases will be managed carefully for LAC. 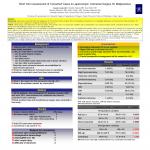