Background and Aim: Laparoscopic pancreaticoduodenectomy (LPD) has not been established, because it might be very hard to be applied for invasive cases and to radical lymph node dissection. Especially, reconstruction in LPD is extremely difficult and requires excellent skills. Therefore, we have newly developed laparo-assisted approach (LAPD) with complete laparoscopic resection and reconstruction under direct visualization through a small incision.

Patients and methods: Since 2006, PD was performed for 85 cases, and among them, 12 patients underwent LAPD (since 2011). Eight cases were malignant and 4 cases benign. Exclusion criteria for LAPD is just patient’s preference to open method and past surgical experience.

Retrospectively, clinicopathological examinations were done to compare LAPD and open PD (OPD). Op procedures (Fundamental): After pure-laparoscopic pancreas head resection, small incision (4-6cm) is made directly above the pancreas stump, to remove the resected tissue. Additional lymph node dissection around the celiac trunk and superior mesenteric artery can be done, if necessary. Pancreaticogastrostomy is next performed by opening both of the anterior and posterior gastric walls, followed by anastomosis between the posterior wall and the pancreas surface in one layer (horizontal mattress and interrupted suture). To perform hepaticojejunostomy, special retractor is attached on the incision to retract to the rightward.

RESULTS: During the period, average operation time was 492min, and none of the patients in LAPD underwent transfusion during the operation. Postoperatively, they experienced no complications including pancreatic fistula (Grade B/C). On the other hand, in OPD, 4.1% of the patients encountered delayed gastric emptying or cholangitis, though there were no PF as well. There were no differences in overall complications, pancreas fistula, or delayed gastric emptying. There were no significant differences in number of lymph nodes retrieved.

CONCLUSIONS: This series demonstrates that LAPD appears to be safe and feasible, with benefits over the open counterpart. However, the long-term evaluation should be necessary for standardization in reporting. 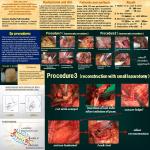