Method: After Institutional Review Board approval, a retrospective review of data was performed on patients who had undergone RNY gastrojejunostomy or esophagojejunostomy, with or without gastric resection, after failure of previous fundoplications.

Results: Twenty-two patients underwent re-operative procedures with RNY anastomoses either to the esophagus (n=4) or to a small gastric pouch (n=18) from January 2004 to September 2007. Recurrence of reflux (n=7) or severe dysphagia (n=7) were the main indications in the majority of patients (62%) requiring reoperation. Most patients had 1 previous procedure, while 6 patients had two and 2 patients had three previous anti-reflux procedures. Sixteen (73%) of our RNY reconstructions were done via laparotomy and six (27%) with a laparoscopic approach. Ten patients (45%) had major or minor complications within the 30-day postoperative period. No post-operative mortality was observed. At a mean follow-up of twenty-three months, the mean heartburn score was 0, the regurgitation score was 0 and the mean dysphagia score was 1. The mean postoperative BMI was 25.4 compared to a preoperative BMI of 31.

Conclusion: RNY reconstructions are effective and safe as remedial surgical procedures in a select group of patients with previously failed anti-reflux surgeries. They are associated with a significant morbidity. 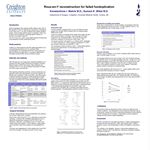