INTRODUCTION: Laparoscopic sleeve gastrectomy (SG) is gaining popularity as a procedure for the treatment of morbid obesity and type 2 Diabetes Mellitus. Either as a first-stage procedure for super obese patients or as a definitive procedure, SG is becoming the first bariatric procedure in France. Preliminary results suggest that weight loss and resolution of comorbidities with SG could be comparable to those of laparoscopic Roux-en-Y gastric bypass (RYGB). In a multicenter, retrospective study, we analyzed the weight loss, the resolution of comorbidities including type 2 diabetes, and the complications of both SG and RYGB on a case-control basis.

METHODS AND PROCEDURES: A retrospective, case-control, comparative analysis was performed on 200 patients in each arm who underwent either SG or RYGB from January 2005 to March 2008. Patients in each group were matched for age, sex, and body mass index. The percentage of excess weight loss (EWL), the resolution of comorbidities, , and the complications in each group were compared at 6, 12, and 18 months, respectively.

RESULTS: Overall mortality rates were similar in both groups. However, the morbidity rate was significantly higher in the RYGB group (20.5 %) as compared to the SG group (6.5 %) (p<0.05). The percentage of EWL at 6 months and the overall remission of type 2 diabetes were significantly better in patients who had RYGB (p<0.05). However, the percentage of EWL at 12 and 18 months as well as the resolution of non-diabetes comorbidities were comparable in both groups. 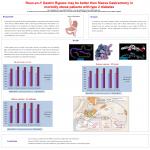