RESULTS: Preoperative parameters were not significantly different between the two groups except for age (Table 1). Mean operative time was 51% longer in RSILC when compared to SILC (120±32 mins versus 79±35 mins, p≤0.0001). There were no significant differences in EBL, conversion rates, intraoperative, and post-operative complication rates. There was one complication in the RSILC group and two occurred in the SILC group. One patient in each group developed choledocholithiasis requiring re-admission and ERCP. The other complication was a surgical site infection, which was treated with antibiotics. The rate of additional port placement was not significantly different. Furthermore, LOS was not statistically significant (Table 2). There was a strong inverse correlation between chronologic case number and operative time for SILC, (r2=0.15; P=0.04) however not for RSILC (P=0.19). There was no difference in surgeon-specific operative times.

CONCLUSION: RSILC is both safe and feasible. However, given the significant difference in operative time compared to SILC, the robotic platform may not be cost-effective for surgeons that can adopt single-incision laparoscopic surgery. If unfamiliar with single-incision laparoscopic surgery, the robotic platform offers an additional tool in the surgeon’s armamentarium. 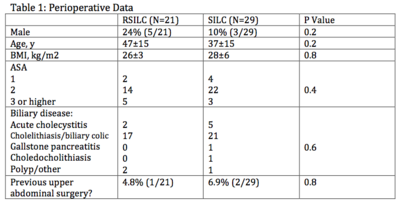 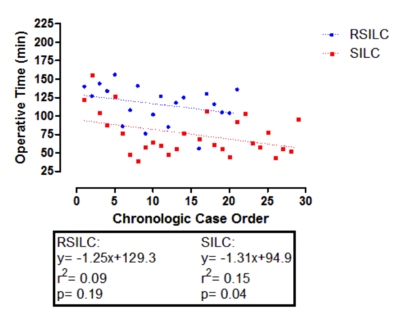