Background: Bochdalek hernias are usually diagnosed in the neonatal period, occurring in 1/2200 to 1/12,500 live births. There are few reported cases of Bochdalek hernias in adults. Robotic repair has not been described in current literature as opposed to the laparoscopic approach. Here we present a case of an adult with clinical signs of bowel obstruction secondary to a Bochdalek hernia which was repaired using a robotic approach.

Case Report: A 74 year old gentleman with past medical history of benign prostatic hyperplasia presented to the emergency department with a one week history of nausea, vomiting, diarrhea, and decline in appetite. Computed tomography (CT) imaging of the chest and abdomen revealed elevation of the right hemidiaphragm and evidence of small bowel obstruction. The patient was managed conservatively with nasogastric tube placement and bowel rest. He underwent colonoscopy which could not be completed secondary to a transverse colon stricture which was confirmed by barium enema. Upon repeat CT imaging, the patient was found to have herniated colon through a right sided diaphragmatic hernia which caused colonic narrowing. The patient’s intestinal obstruction improved clinically with continued conservative management and he underwent robotic repair of a right posterior diaphragmatic hernia. The hernia defect was closed with interrupted figure of eight Ethibond sutures. A right sided chest tube was placed. Intraoperatively the herniated proximal transverse colon was noted to be ischemic and a right hemicolectomy was performed. He recovered well and was discharged home on postoperative day five.

Conclusions: Congenital diaphragmatic hernias usually present in the neonatal period and are rare in adults. Operative repair is recommended and laparoscopic repair has been described. Based on the existing literature regarding laparoscopic repair and the current case report, robotic repair also appears to be a viable and safe option. 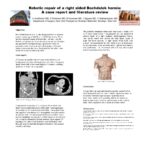