From May/1996 to August/2013, 174 patients underwent a reoperation by our group. The mean age was 46 years old (1 – 78). Twenty-four (13,8%) of them were first operated by laparotomy and 150 (86,2%) by laparoscopy. We divided the patients into 3 groups regarding the main reason for reoperation: GERD recurrence, dysphagia and paraesophageal hernias.

In the dysphagia group, the mean time between first surgery and reoperation was 29 months, ranging from early surgery (first weeks) to 109 months, whereas in the recurrence group, was 66 months (2-260 months).

In the recurrence group, a total fundoplication was done in 71 (98,6%) cases. There was one patient that was treated with a Roux-en-Y gastric bypass. We used a mesh to reinforce the hiatus in 16 patients in this group (22,2%). Follow up interview was possible in 53 patients (73,6%) with an average of 30 months. Forty-five (84,9%) patients are asymptomatic, 4 still complain of reflux and 2 present dysphagia. One patient with a new recurrent paraesophageal hernia complains of thoracic pain.

In the paraesophageal hernia group, a mesh was used to reinforce the hiatus in 15 (50%) patients. 13 were treated with total fundoplication, 1 with gastric bypass and simple suture of the hiatus was done in an immediate reoperation after vomiting in the first post-operative day. Objective follow up was done in 19 (63,3%) patients. Normal endoscopy was found in 12 (63%) and small paraesophageal hernias in 7 (37%), six of them are asymptomatic.

In conclusion, there are many causes for a new operation following failed anti-reflux procedures. Most of the times is the recurrence of the disease, but in our series, persistent dysphagia is still a very common reason.

The surgeon must be aware that it is a complex procedure, with more complications and longer operative times, but good results are still possible. 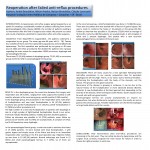