Introduction: Minimally Invasive Colorectal Resection (MICR) for malignant and benign indications is associated with significant increases in plasma levels of 12 proangigenic proteins for up to 1 month which may stimulate tumor angiogenesis and growth in patients with residual cancer. It is thought that the plasma increases are related to wound healing. It has been shown that levels of 8 proangiogenic proteins (VEGF, Placental Growth Factor [PlGF], Angiopoetin2 [Ang2], Monocyte Chemo-attractant Protein 1(MCP-1), Chitinase 3-like1 [CHI3L1], Osteopontin [OPN], Matrix Metalloproteinase-2 [MMP-2], and MMP-3) in postoperative (postop) pelvic and subcutaneous Wound Fluid (WF) in MICR cancer patients is many fold higher than plasma levels. This study’s purpose was to see if similar WF elevations are noted in benign indication MICR patients.

Method: Patients in an IRB approved data/plasma bank who underwent elective MICR for benign conditions were studied. Clinical and operative data was collected. Besides preop blood samples, postop blood and wound fluid (WF) samples were simultaneously collected on POD 1 and 3. Also, a 3rd sample set was taken for most patients between POD 7-13; these samples were bundled and considered as a single time point. Samples were centrifuged and stored at -80°C. WF was collected via subcutaneous Jackson Pratt (JP) drains placed in the largest incision. Blood and WF levels of the above 8 proteins were determined in duplicate via ELISA. Analysis was done with the Mann Whitney and Wilcoxon signed rank tests.

Conclusion: As shown in prior studies, MICR was associated with plasma elevations postop for all 8 proangiogenic proteins at all 3 time points (p<0.05 for all); further, WF levels at the same timepoints were 2-107 x higher than plasma levels. These results suggest the source of the added plasma protein is the surgical wounds and that surgery-related proangiogenic plasma changes are surgical trauma related and are not dependent on the surgical indication. Further studies are warranted. 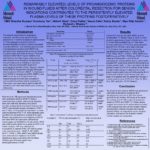