<Introduction and Objectives> 3D images for laparoscopic surgery had been rapidly accepted as useful tool especially in suturing maneuvering. Since recent trials such as single port surgery or NOTES require smaller devices, thinner camera will be effective to retain space inside the port. To provide depth cue using smaller endoscope, combination of small monocular endoscope and 2D-3D converting software would be a clue. We developed software and tested its vision in the trainer box and the porcine model using small monocular endoscope.

<Materials and Methods> The algorithm of the 3D image conversion is separated into two steps. 1. Extraction of 3D information of objects from each frames of monocular camera, generated with the luminance value of each pixel under the assumption of the homogeneity of the specular character among the focusing area with single illumination. 2. The 3D model was rotated horizontally by a few degrees, right and left direction, to generate parallax and rendered on the screen.
PicoEndo™ – a small camera system that was kindly provided by Stevrin & Partners (Blekinge, Sweden), consists of 4mm-diameter camera head and small processing unit, directly connected to PC via an A/D converter. This diminutive camera shows clear imagery that has 400 by 400 effective pixels and 120 degrees of diagonal view field. The virtual 3D vision was shown on a 3D display. Five subjects had performed “five-time rope passing test” and “five-pin drop test” under original 2D and processed 3D vision. Three surgeons tested suturing maneuvering under the 3D vision in a porcine model.

<Results> The 3D vision was displayed with sufficient perception of depth cue in every subject. In the test using trainer box, all subjects had completed the tasks with real-time processed virtual 3D vision. However, slight time-lag owing to the 3D processing and motion-blur were severe and often bothered subjects. In the porcine model, depth cue was perceived in every surgeons tested including direction of tip of needle (Figure). Suturing maneuvering was completed under the 3D vision. 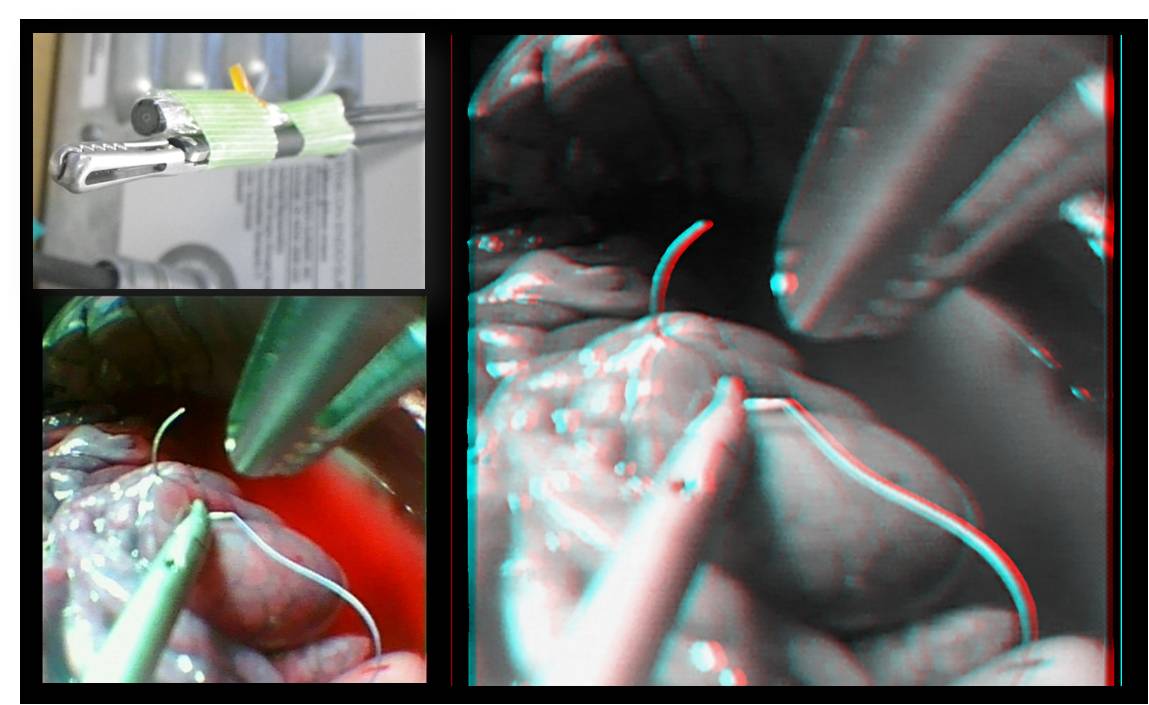 Figure. Upper-left: An overview of the tip of small camera with a conventional forceps. Lower-Left: An original image of PicoEndo™. Right: A resultant 3D image processed with the software (shown as anaglyphic image).

<Future directions> The processing algorithm and hardware will be improved to reducing the time-lag and noises to offer more intuitive spatial information feedback to the surgeons. The system will be equipped to the conventional video processors for the laparoscope.